The Gobustan rock carvings cover a wide range of issues, all of them are unique and represent great artistic value

Gobustan is a region with the territory of 100 square kilometers between the south-eastern bottom of the Caucasian mountains and the Caspian Sea; the territory is covered with numerous river mouths and gully. The name Gobustan originates from the word Gobu meaning a gully. 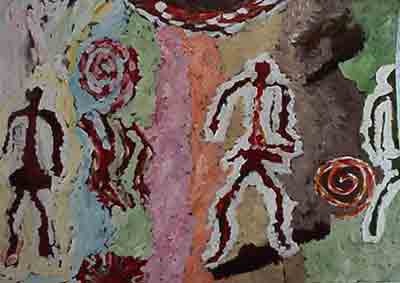 There are rocky mountains 600-700 meters high covered with limestone layers, tectonic heights, semi-steppe. The Gobustan climate is too dry with hot and airid summers and soft winters.

Gobustan is a unique historical and archeological complex with cultural heritage representing the periods from the Stone Age to the Middle Ages. These are mostly rock carvings, camps of primeval people and settlements. They certainly attract many researchers, travelers and history amateurs to the place.

Researchers learnt about the Gobustan petroglyphs in the 1940s. Prominent Azeri archeologist Iskhak Dzhafarzade was the first to study the Gobustan cultural monuments: he discovered and studied about 3,500 of rock carvings, inscriptions, cup-shaped cavities and other traces of people on the mountains of the area.

Study of the rock carvings has been systematically done since 1947. The surfaces of about 1,000 rocks have revealed contour and silhouette drawings of people, animals, signs and inscriptions dating from the Upper Paleolithic to the subsequent periods. The territory is fantastic ruins of rocks forming about 20 of small and large caves that people obviously used as shelters in bad weather. There are drawings of people, animals and signs found on the walls of these shelters and outside.

The Gobustan rock carvings cover a wide range of issues, all of them are unique and represent great artistic value. The drawings show male and female figures, wild bulls, deer, lions, horses, dogs and wolves. In some parts, researchers discovered many rock drawings on those parts of the rocks that were already deep under the ground; among the discoveries there were also working instruments, animal bones, decorations, domestic items and so on.

The Gobustan reserve has over 100,000 of archeological items. All of them and the Gobustan rock carvings form a unique complex of ancient history related to the earliest historic periods. They really help study the earlier periods in the history of the Azeri people.

This complex is also important or studying geological, botanical, soil science and other scientific issues. Soon, the Gobustan archeological complex will be part of the UNESCO world cultural heritage.