The protein which controls the production of insulin is capable of extending lifespan in laboratory mice, recent studies have shown. Immortality, however, costs too much money. US researchers currently study the protein, which, as scientists assume, can slow down the ageing process. 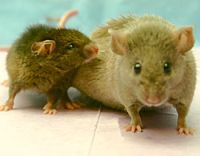 Scientists discovered the Klotho protein, which extends male rodents' lives by 31 percent, if the latter produce quite large quantities of the substance from the protein. Sexual discrimination apparently exists in the natural world too: the lifespan of even old female mice could be extended by some 20 percent. Dr. Makoto Kuro-o from the University of Texas presented the results of the research on the pages of Science magazine.

Beta cells of the pancreas secrete insulin in response to a rising level of circulating glucose. Insulin controls the sugar constituent in blood; it is an extremely important substance for diabetes patients. A group of scientists named the new substance as Khloto after a Greek goddess of fate that spins the thread of life. According to the legend, all Greek gods, including Zeus, were scared of the goddess, for she could easily break the thread.

There is a reverse side of the medal to the laboratory version of immortality. The mice, which produce larger quantities of the Khloto protein, run higher risks of developing diabetes. To make matters worse, their reproductive instincts fade away, which endangers future generations of long-living mice in contrast to the rodents which possess normal quantities of the life-extending protein.

However, scientists were thrilled with discovery of the life-extending capacity of the protein. “I do not think that we will ever be able to discover a gene, which regulates the lifespan like a light switch. However, this protein gives us a hope that it will be discovered some other time,” Harry Dietz from The John Hopkins University said.