The first public discussion of the proof of the great theorem by French mathematician Pierre de Fermat is to take place on August 23rd in Moscow. The proof has been provided by a scientist from the city of Omsk, Siberia. 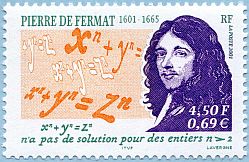 Doctor of Technical Sciences Alexander Ilyin will present his proof of Fermat's theorem at a meeting to be held at the Academy of Aviation and Aeronautics. His colleagues in Omsk believe Alexander's proof is flawless and simple.

Mr. Ilyin unveiled his proof of the great theorem at a press conference in Omsk. Omsk-based scientists and journalist have not found any errors so far.

Having specified a few details, Omsk mathematicians spoke out. According to Candidate of Technical Sciences Alexander Shefer, Fermat's theorem was proven and the proof was very simple. Both Academician Leonid Gorynin and Professor Sergei Chukanov said the proof was flawless.

Mathematicians all over the world have been trying to prove Pierre de Fermat's theorem for nearly 400 years.

Fermat's theorem is the unproved theorem indicating that the equation xn + yn = zn has no solution for x,y,z nonzero integers when n is greater than 2.

A number of outstanding mathematicians could only prove that this ostensibly simple equation worked for individual n's. There is a general proof by means of the Taniyama-Shimura theorem but it is subject to certain conditions.

Now Alexander Ilyin says he has the proof that works for all n's of Fermat's theorem. However, the great theorem may be considered proven only two years after the official publication of the proof. A two-year period is required for the international mathematical community to look into the solution and find an error, Newsru reports.

18:05
Russia sets up army base in Serbia
00:42
Russia responds to reports about nuclear arms on high alert
00:39
Israel strikes all of Gaza Strip. Tell Aviv opens all bomb shelters
23:43
Putin-Erdogan summit: Russia and Turkey switch to national currencies
19:49
Russia demands US nuclear weapons in Europe be removed
19:05
Israel strikes Gaza killing Islamic Jihad commander
18:36
China depends on US more than US depends on China
17:45
Chinese dragon starts breathing fire in Washington's face
17:15
The National Interest names the place of a possible war between China and US
16:46
Polish expert reveals where the decisive Russia – US battle will take place
Hotspots and Incidents
Russia warns of catastrophic consequences should Ukraine continue shelling Zaporizhzhia NPP