Codex Sinaiticus: The earliest Bible manuscript to appear on the Internet soon

Scientists involved in digitization of the Codex Sinaiticus claimed that the copy of the famous manuscript would appear in the Internet in the nearest future. It may be possible that after publication of the ancient text all of the confessions will have to reconsider their dogmas. The fact is that Codex Sinaiticus includes a full text of the Bible. It contains the oldest version of the New Testament in the world as well as the Greek translation of the Old Testament, the Septuagint. The latter includes the books, which are now considered apocryphal. 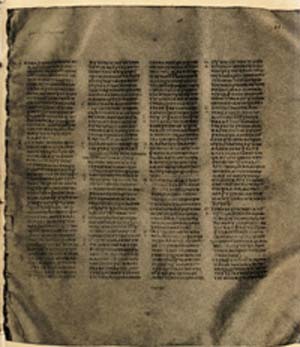 The scientists consider the parchment manuscript to be one of the 50 copies of the Holy Scriptures ordered by the Roman emperor Constantine after he had been converted to Christianity. During the recent 20 years only 4 researchers had an access to the original text. The manuscript is called by the name of the place where it is kept – Monastery of Saint Catherine on Sinai Peninsula in Egypt. The cloister is situated at the foot of Mount Sinai where Moses received the Ten Commandments.

The scrolls had been kept in the monastery until XIX century, when a German researcher Constantin von Tischendorf took away a part of them to Germany and Russia. There is still a belief in the monastery that the manuscript was stolen. However, the history proves the following.

Constantin von Tischendorf arrived in Egypt aiming to obtain the ancient manuscript by all the possible means. He found out about its existence while still studying at the University of Leipzig. He was obsessed with recovering the original text of the New Testament, because he thought that its numerous translations could lack something really important. For several years he had been traveling to many European cities where he studied the primary sources.

First of all he read Codex Ephraemi Syri Rescriptus, also known as Codex Peresianus. In order to do so he had to scrape the later text off the parchment and to read the original text of the Greek Bible. It was considered to be written in the 5 century BC. In 1843 obstinate Tischendorf published a palimpsest (a manuscript on which an earlier text has been effaced and the vellum or parchment reused for another) of Codex Ephraemi and was given a chance to study Codex Alexandrinus. He was also striving for permission of Vatican to study Codex Vaticanus.

Then the German sets out on his journey to Egypt. When he arrived at the Monastery of Saint Catherine on Mount Sinai there were only 18 monks left there. They did not have much desire to communicate with a gentile, but the latter was not giving up and found 129 parchments. It was the Greek Translation of the Old Testament Septuagint (“LXX”). The texts of the New Testament were not discovered at that time.

In 1853 on his second visit to the Monastery of St. Catherine he offered the monks to sell him the remaining parts of the Codex. When they refused Constantin decided to ask for help of the Russian government, which was then patronizing the monastery. Back at the monastery the monks welcomed Tischendorf and the Superior gave him the ancient manuscript, which had been kept, in his cell. Tischendorf was celebrating! He received the primary sources, containing the complete New Testament as well as two apocryphal books. Neither Codex Vaticanus, nor Codex Alexandrinus had the full text of the New Testament. Moreover, the manuscript turned out to be older than the two codices known before! The discovery contained the majority of the Old Testament books and also The Epistle.

At first the Codex was given to Tischendorf for temporary possession. But afterwards when the great researcher got acquainted with Russian Grand Duke Constantine the monks donated the manuscript to Russia. For  celebrations of the 1000th anniversary of Russia Constantin Tischendorf published Codex Sinaiticus and brought the book to St. Petersburg. It was published in Leipzig under the title “Codex Bibliorum Sinaiticus Petropolitanus auspiciis Imperatoris Alexandri II. Susceptæ” (which can be vaguely translated as Codex Sinaiticus, saved from the dark under the patronage of His Imperial Majesty Alexander II). Tischendorf was congratulated on his success by European monarchs and the Pope himself. He was granted hereditary nobility in Russia.

The most important contribution of the scientist is the comparison of four manuscripts: Codex Sinaiticus, Codex Alexandrinus, Codex Peresianus and Codex Vaticanus. By doing so Tischendorf proved that the New Testament of the modern Bible reached present time in its true value. However, the Ecumenical Council at Nicea had already approved the Canonical Gospels by that time. That is why it did not lead to any disturbance of the apologists of Christianity.

Later on Codex Sinaiticus was presented to the Russian Tsar. In 1933 it was sold to England and exhibited in the British Museum in London. Four fragments of the manuscript are known in the world. The largest one – 347 out 400 pages – is kept in the British Library, the rest is kept in the library of the University of Leipzig (Germany), the National Library of Russia in St. Petersburg and in the Monastery of St. Catherine.

However, exposing the ancient manuscripts to public is just the first step on the way of discovering new parts of the New Testament. The apocryphal books have become the object of study of theologists as well as mere enthusiasts. The Qumran manuscripts found in 1947 in Israel contain many apocryphal works, which interpret questionable extracts of the Bible in a different way, have become a topic of discussion between priests who stick to their dogmas and researchers looking for the truth. Earlier on the sources were locked up in the libraries. Now they are slowly becoming exposed to public. When comparing such primary sources, which were disregarded as apocryphal books, one can see that the Old and the New Testaments lack a lot in their narration. This relates not only to minor details, but to the events of major importance as well. Anyway, according to prophets and saints people will solve the mysteries of the universe at the End of the World. And the future of the mankind will depend on how they will be able to use them.

Septuagint – (derived from the Latin word for “seventy”) the translation of the Old Testament commissioned by the Ptolemy. It was done by the Seventy Interpreters (that is how it received its title). It is considered basic for Orthodoxy. It was translated into other national languages. Catholicism uses Vulgate – the translation by St. Jerome.