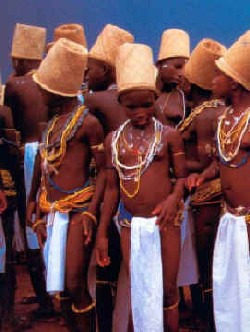 It is worth mentioning that there are two types of female circumcision in modern medicine. One of them stipulates the excision of the mucous fold, which covers the clitoris up and the removal of the superfluous lower lips of pudendum. It is a medical operation in its essence, which presumably leads to positive consequences.

The second type of female circumcision can be described as a religious, traditional ritual, which is common with over 30 tribes living on the African continent. The ritual circumcision has a goal to “purify” a woman at a very young age before she reaches puberty. Tribal shamans may change the genitals of a girl to their liking: detach only the clitoris or the clitoris and the lower lips altogether. The ritual implies that a woman will stop experiencing the shameful pleasure of sex and live for the sake of the reproductive function only. It goes without saying that African tribes do not use sterile medical instruments during their operations. The antiseptic treatment leaves much to be desired, not to mention the anesthetic action. Little has changed since the Stone Age at this point: young African girls probably wish they were born as males. They have to take it for granted and deal with horrible pain: African tribes are certain that circumcision turns a girl into a grown-up young woman.

Fighters for women's rights have been trying to attract society's attention to this barbaric ritual for quite a long period of time already. According to a well-known worldwide movement Amnesty International, about 135 million of women living on Earth have already been subjected to this procedure. As long as the matter touched upon traditional tribal and ritual matters, specialists preferred to turn a blind eye on it on the assumption of local cultural peculiarities of this or that ethnic group. The current state of things is changing, though.

A group of Swedish scientists from Karolinska Institutet, under the direction of Dr. Lars Almroth, studied a large group of Sudanese women and concluded that female circumcision leads infertility. The ritual, the prime goal of which is to preserve the fertility of a woman, virtually destroys the perspective of procreation. The number of circumcised infertile women is five or six times larger in comparison with those, who were lucky to avoid the horrible operation.

The reason is very simple. Operations of circumcision are performed under antisanitary conditions, which subsequently result in a whole bouquet of infectious diseases of the urogenital system, not to mention scars and commissures and the virtual transformation of the genital tract of a woman. Needless to say that such consequences exclude normal and healthy processes of conceiving and bearing a child.

The Swedish scientists published the results of their research in one of the most respectable medical periodicals, The Lancet. On the other hand, the publication is not likely to put an end to the barbaric ritual on the African continent. Hundreds of years of history and traditions based on the protection of innocence and immaculacy – these are all historical and cultural factors, which mean that it will not be possible to exterminate the practice of female circumcision in the nearest future. On the other hand, adversaries of the ritual have obtained a significant support group of in the face of medical specialists. Causing damage to the reproductive health of a nation is a very good reason to address to the World Health Organization and even to the United Nations Organization. Laborious elucidative work and sanitary education will help young Africans leave their primeval sexual principles behind and become at least a little bit more civilized.

Medics should not try to enhance the ritual circumcision of women, though, and provide tribal shamans with disposable medical tools, antiseptics and anesthetics. Such a decision will make the tradition even stronger.