The trouble, which has been continuously haunting Discovery shuttle, has not made NASA decline a number of large-scale space projects. No one in the world knows at the moment, if the unfortunate spaceship ever makes it back home to Earth, but the US space agency hurries to publish the details of its Lunar and Martian programs. 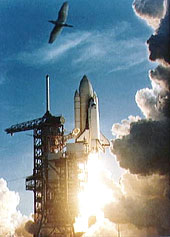 The details of the two programs have been published in a little-known newspaper Orlando Sentinel. As it can be seen from the article in the newspaper, certain details of the programs are subject to change, although the NASA administration has already made all important decisions on the matter. The USA thus plans to send four astronauts to the Moon before 2018. The astronauts are supposed to start building a lunar space station and equip the construction with all necessary living and working conditions. The US lunar base is likely to be built in the area of the south pole of the Moon. Saturn-5 rockets, which used to deliver cargoes to the orbit for the Apollo lunar mission, ceased their existence 30 years ago. NASA had to look for alternative carrier rockets to replace Saturn-5: the document published in the above-mentioned newspaper says that the US space agency was choosing between a shuttle-based heavy rocket or modernized versions of Atlas and Delta carrier rockets. The choice was eventually made on the shuttle variant, which is actually a huge automatic rocket, the height of which is comparable to the height of a 40-storied building.

The giant rocket is planned to be developed during the period from 2010 to 2018. It is noteworthy that the module with astronauts will be launched into space separately. The second stage of the spaceship, which is called the Earth Departure Stage, will dock the manned module in Earth's orbit and head to the Moon afterwards. If the operation is successful, the mission to the Moon will be followed with another grand project to conquer Mars. According to NASA's plans, six astronauts will be flying to the red planet for 500 days.

It is noteworthy that the White House and the US Congress have approved the Martian project of NASA. However, the program needs to be tested with time to prove its reliability.

Current problems with Discovery shuttle cast serious doubts on perspectives of the lunar and Martian missions of the USA. Such ambitious projects are rather expensive: American scientists and researchers will have to spend some $217 billion on the above-mentioned flights before 2025. It goes without saying that NASA may not pass the test of time; the US government may change its mind about the space programs too. It seems that the US space agency simply decided to publish the detailed descriptions of its major space projects to calm down the American society against the background of Discovery's troubles.