Despite a great deal of information people know about this world, it is still full of mysteries. Space regularly creates phenomena that perplex the ever inquisitive earthlings. Researchers have long been studying the celestial bodies which “had come into close contact” with Earth i.e. meteorites and comets. 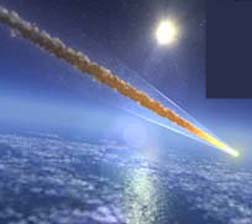 A fourth expedition of Russian scientists is due to set off on August 1st from Bodaibo. The expedition will be looking for an impact site of a celestial body known as “the Vitim meteorite.” Researchers are confident that they will find a location where parts of the huge celestial body hit the earth. The meteorite exploded some 30 km above the ground in 2002. The previous three expeditions ended in failure.

This time around the expedition leaders are confident that the latest recalculations pertaining to the impact site are true. The recalculations are based on seismic data. Scientists hope to see evidence proving their hypothesis. They believe evidence may reveal itself as a large number of felled trees, broken branches of the trees, and traces of the meteorite embedded in the wood. There is no hope to discover any large fragments because the meteorite was actually torn asunder into tiny particles by the immense explosion.

The expedition will be the final attempt to find the traces of the Vitim meteorite. The participants say they are going to call it a day and scratch the project should they fail to succeed this time. The longstanding dispute over the origin of the meteorite will be resolved if pieces of the celestial body are found. Some scientists persistently claim that the meteorite in question was a comet.

The participants of the expedition are keen to unravel one more mystery. The mystery refers to the so-called Kolpakov cone. The cone is a crater-like formation sitting on the side of a mountain. Not unlike the well-known lunar craters, the Kolpakov cone has a small heap at its bottom. The cone is 70 meters in diameter. It is composed of individual blocks of limestone.

Scientists have been holding heated debates over the origin of the cone since the day it was discovered back in 1949. Some say that the Kolpakov cone is yet another trace of the giant meteorite. Others believe that the crater was formed by a powerful underground explosion. Some scientists even believed that the crater had been formed by a piece of the legendary Tunguska meteorite. The above theory has been fully disproved by now.

Geologists and astronomers intend to continue their research of the Kolpakov cone as opposed to the Vitim meteorite project which could be shelved subject to results of the upcoming expedition. Their intentions are pretty understandable. The Vitim meteorite still exists only as an event recorded by satellites as they monitored the earth's atmosphere. On the contrary, the Kolpakov cone is a material object.