China used a ground-based missile to hit and destroy one of its aging satellites orbiting more than 500 miles in space last week – a high-stakes test demonstrating the country's ability to target regions of space that are home to U.S. spy satellites and space-based missile defense systems. 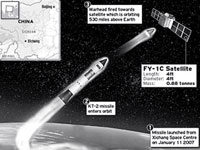 The test of anti-satellite technology is believed to be the first of its kind in two decades by any nation and raised concerns about the vulnerability of U.S. satellites and a possible arms race in space.

China's action drew sharp protests from other nations with satellite programs – a predictable response that experts said dramatically illustrates Chinese willingness to face broad international criticism when it comes to space, which Beijing considers a key part of the push to modernize its military and increase its ability to compete in high-tech warfare, wfaa.com reports.

The United States criticized China on Thursday for conducting an anti-satellite weapons test in which an old Chinese weather satellite was destroyed by a missile.

The Bush administration has kept a lid on the test for a week as it weighs its significance. Analysts said China's weather satellites would travel at about the same altitude as U.S. spy satellites, so the test represented an indirect threat to U.S. defense systems.

"The United States believes China's development and testing of such weapons is inconsistent with the spirit of cooperation that both countries aspire to in the civil space area," National Security Council spokesman Gordon Johndroe said. "We and other countries have expressed our concern to the Chinese."

Aviation Week & Space Technology, the first to report the test, cited space sources as saying a Chinese Feng Yun 1C polar orbit weather satellite, launched in 1999, was destroyed by an antisatellite system launched from or near China's Xichang Space Center in Sichuan Province.

The satellite-killing capability demonstrated by China was no surprise to the Bush administration, which revised U.S. national space policy in October with an eye on boosting protection of U.S. civilian and military satellites.

In a major speech about the policy last month, Robert Joseph, the State Department's point man for arms control and international security, said other nations and possibly terrorist groups were "acquiring capabilities to counter, attack and defeat U.S. space systems."

"No nation, no non-state actor, should be under the illusion that the United States will tolerate a denial of our right to the use of space for peaceful purposes," Joseph said on December 13.

In classified projects shielded from public debate, the United States has been widely reported to be developing satellite-killers of its own, using more advanced technologies, including lasers, Reuters reports.

Caceres said he expected the test to strengthen the Pentagon's hand in seeking funds from Congress to press a host of costly military space programs, almost all of which are over budget and behind schedule.