A new Russian “hybrid” re-usable space vehicle will be built without using tiles, the most vulnerable component of U.S. Space Shuttles, according to a statement made by Vladimir Syromyatnikov, director general of consortium Kosmicheskaya Regata (an affiliate of the Rocket Space Corporation Energia. 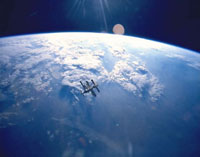 The new vehicle will fly as a capsule the longest part of the journey. The lander's wings will be kept folded and protected by heat insulation. The protective screen will be released during the reentry and the vehicle will fold out the winds to land as an airplane.

The new vehicle will combine the positive characteristics of both Soyuz and Buran vehicles. It will have a compact launch configuration. It will be also compatible to the system of emergency rescue. One of the versions is expected to weigh 7 tons, therefore Soyuz rockets can be used for putting it into orbit. Unlike the winged space vehicle, it will have heat insulation built out of heat-resistant alloys. No tiles will be used.

The development of the new vehicle will enable designers to get rid of the tiles, the most vulnerable component of U.S. Space Shuttles. “Using new materials for heat insulation is one of the project's major design achievements because the tiles are faulty and too expensive, they have to be repaired before and after the launch,” said Mr. Syromyatnkov.

“Since the vehicle will start the landing as a capsule and complete it as an airplane, it will be capable of returning to Earth at a second space speed,” pointed out Mr. Syromyatnikov. At present the space vehicle development has been completed to the stage of technical proposals, Itar Tass reports.