Archaeologists uncovered a 28,000-year-old phallus in the area of Schwabische Alb mountain ridge in Germany. Scientists referred the finding, measuring 20 centimeters, to the Paleolithic era. They supposed that it was used both as a weapon and a symbol of masculinity. 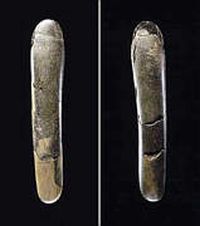 Archaeologists from the Tuebingen University, Germany, have come across numerous items made of elongated stones during the recent years, on which they found traces on man-made treatment. The professors meticulously analyzed the findings, but they were perplexed to say, for which purpose ancient humans were using those strange oblong tools.

A group of specialists of the Tuebingen University, with Nicholas Conard at the head, noticed that the phallus was adorned with a pattern of lines carved on the sides and on the top of the stone. Scientists concluded that ancient craftsmen carved the lines out with the help of stone instruments.

Archaeologist Michael Bolus believes that the object was used as a phallic symbol. The radiocarbon analysis of bone remnants found with the phallus allowed to specify the age of the ancient tool – it was made 28,000 years ago.

It became a remarkable finding indeed, for archaeologists have never heard anything about a stone phallus of the Paleolithic era before. The era is presumably known for its figurines of paunchy Venus and other feminine symbols.

Scientists uncovered a 19,2-centimeter phallus made of 14 fragments in 2004 too: the finding was referred to the ice age epoch. The fragments were found in the layer of soil, which preserved a large number of stone tools and vestiges of fire. The perfectly elongated, non-existent shape of the item testified to its man-made origin.

The unique finding allows scientists to take an absolutely different look on ancient symbolism and sexuality. It is a very important addition to ultra-rare figurines, which were referred to the Paleolithic era. Specialists say that the tools were most likely used as chisels or gouges.

Archaeologists found several other ivory figurines, a lion-man and a waterfowl among them, on the same spot, near Schelklingen. The figurines are a thousand years older than the stone phallus and can thus be described as most ancient pieces of sculpture work that have ever been found in the history of the human civilization.