Scientists first started drawing attention to a hole in the ozone layer over Antarctica 15 years ago. The average area of the ozone hole has recently become the largest ever observed. Does the hole pose a threat to human race? Scientists’ opinions on the issue vary a great deal. 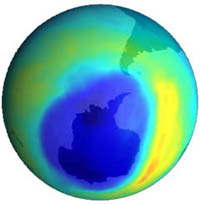 “The ozone layer located at 10 kilometers above the earth’s surface plays an exceptionally important role in the protection of Earth against the harmful effects of ultraviolet radiation,” said Anatoly Vyatkin, a senior researcher at the Russian Federal Service for Hydrometeorology and Environment, in an interview to Nezavisimaya Gazeta. “However, the ozone layer can be easily damaged by emissions of certain substances into the atmosphere. The temperature fluctuations in the stratosphere have an enormous effect on the thickness of an ozone layer. The ozone holes tend to expand as the temperatures drop. Likewise, they become smaller when the temperatures go up. This year’s temperatures in the lower stratosphere were five degrees below the norm, and therefore the concentration of ozone has decreased,” added Vyatkin.

Many scientists expect the worst possible outcome of the situation.

David Hoffman, director of the U.S. Global Monitoring Division of the National Oceanic and Atmospheric Administration’s Earth System Laboratory, said that “The data mean that the ozone is virtually gone over Antarctica. It appears that the 2006 ozone hole will go down as a record setter.”

However, some scientists disagree with these highly pessimistic forecasts.

Professor Andrei Kapitsa, corresponding member of the Russian Academy of Sciences, believes that the issues of global warming and rapidly increasing ozone holes are myths disguised as scientific revelations.

“Indeed, the amount of ozone decreases by ten or twenty percent by the end of a polar winter and the beginning of a polar spring. But the amount of ozone goes back to normal as a polar summer takes control,” said Prof. Kapitsa. “The normal oscillation takes place the way it’s supposed to be in nature. Now we can see some depletion of the ozone layer. As a result, more ultraviolet rays reach the planet. The rays effectively destroy the bacteriological form of life, which took shape some 800 million years ago only because of the appearance of the ozone layer. However, the development means no harm. We should bear in mind that all those temperature readings indicate just one thing: the planet is likely to cool off a little bit in the near future. The so-called global warming, which ostensibly makes the ozone layer become larger, is simply out of the question,” added Prof. Kapitsa.

Prof. Kapitsa is confident that the statement about the climate changes caused by an increase in the volume of detrimental emissions of carbon dioxide into the atmosphere is fundamentally erroneous. According to him, the cause and consequence are in confusion in this case.

“The seasonal fluctuations are the reason why the amount of carbon dioxide increases or decreases a little in the atmosphere. The catastrophic forest fires make a huge contribution. The volcanoes are even more important. However, the above developments are neither good nor bad. For example, an excess of carbon dioxide gives a boost to the productivity of cultivated crops,” said Prof. Kapitsa.

In light of the above, we should not be afraid of the coming global warming nor should we be worried about the new Ice Age, according to Prof. Kapitsa.

Temperatures were subject to fluctuations in different periods of history. The annual mean temperatures on Earth were approximately 5 degrees below today’s average some 300 years ago.

Prof. Kapitsa believes it would be wrong to maintain that the ozone layer has been largely depleted over the last ten years. The question is: Why do people keep talking about the dangers relating to the decrease of the ozone layer?

“I’m afraid the money is a key word in this case,” Prof. Kapitsa said. “Chemical companies producing the so-called healthy Freon refrigerants make lots of money once the refrigerants are replaced at a nationwide scale. The replacement of refrigerators and air-conditioning systems in the U.S. alone cost the consumer a total of $220 billion last year. Former president of the U.S. Academy of Sciences Frederick Zeitz said a long time ago that all the theories relating to global warming were far-fetched and couldn’t be proven correct,” Prof. Kapitsa concluded.