Anyone, who is fond of watching celestial bodies, could probably notice that they look larger near the horizon. Naturalists know the reason of this phenomenon: it is mostly an optical illusion. The event, which Russian citizens will be able to observe on Thursday night, will seem unbelievable. 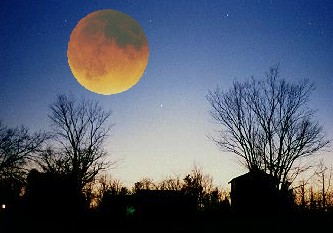 The night of July 22nd will be characterized with a very rare astronomical coincidence: the Moon, which is currently positioned close to the perigee, will reach this Earth-nearest part of the orbit in less than 12 hours after the full moon. When the Earth's natural satellite rises above the horizon soon after midnight, its angular diameter will be 14 percent larger than the minimum (33.5 vs. 29.4). In addition, the size of the lunar disk will become one-third larger than it usually appears.

Nikolay Zheleznov, a senior specialist of the Institute of Applied Astronomy of the Russian Academy of Sciences, said that Russian citizens will have a chance to eyewitness “a fantastic and unbelievable phenomenon.” The unusually large Moon will make the night brighter, the scientist said. Such a phenomenon can be observed once in 20 years.

It is noteworthy that the scientists' conclusion is based on mathematical calculations, which do not take account of observers' visual or psychological peculiarities. The Moon can look larger or smaller at one and the same angular size. The phenomenon can be explained with several factors, the illusion of Ponzo, for example. This illusion is connected with the presence of secondary objects against the background of the Moon – buildings, trees and other items of the surrounding landscape. If an observer takes another location, where there will be no secondary objects in the vision field, the Moon will look smaller. This is the effect of perspective, when a human being observes distant objects.

There is another explanation as well: people imagine the vault of heaven as the flattened dome, not as the ideal sphere, which it virtually is. A human eye sees two similar objects, one of which is situated at the high point and the other one is placed at the horizon. The human mind believes that the second object is farther and consequently larger.

When the Moon nears Earth to the maximum at night of July 22nd, it will be situated at the distance of 360,000 kilometers far from the planet. “The Moon will look very large and close. The phenomenon will make the night brighter not only in St.Petersburg, where nights are traditionally not dark during this time of the year, but also in other cities of Russia,” the spokesman for the Institute of Applied Astronomy said.

It will only be a remarkable astronomical event for residents of Moscow and St.Petersburg. The Moon will not affect people's health, although ebbs and flows are likely to occur in near-shore zones.