Autos may turn into helicopters to disregard traffic jams

Former Russian test-pilot Igor Zaitsev says he has invented a flying auto. He adds that experts all over the world are now working on such flying machines. It is said that a man who invents an air auto will be much richer than Bill Gates. 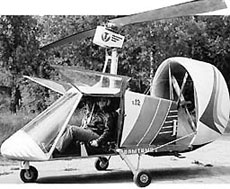 Zaitsev's automobile is parked in a dirty littery hangar of the Chkalovsky aerodrome in the Moscow Region. The invention looks marvelously indeed: the white and blue beautiful auto operates like an ordinary automobile on the surface. When its impeller blades are set lengthwise the machine can perfectly drive along a highway. When the driver wants to take off he needs to stop on the side of the road, start the propeller and move disregarding traffic lights and traffic jams.

The machine looks very much like a helicopter and a submarine at once. Igor Zaitsev says that after the September 11 terrorist attacks, aircrafts not registered in the governmental registers are banned for flights. His invention is not included into the registers, that is why the inventor cannot now demonstrate the wonderful apparatus in action.

In 1920, 17-year aircraft designer Juan de la Sierva tested his new airplane at an aerodrome near Madrid. Suddenly, the machine entered spin and crashed; the pilot tragically died. Later, the designer insisted the death of the pilot was his fault and decided to design a safe airplane which would never enter spin. For a rather long period, Juan watched the bird flight, but a brilliant idea struck him when he saw a maple seed soaring in the air. He noticed that no matter how strong the wind was blowing, the seed still never enter spin. His new machine based upon the maple seed principle took off in 1923; the inventor called it an autogiro. Autogiros got immediately popular worldwide; now there are 100 thousand of such machines in the US.

When lieutenant Igor Zaitsev graduated from the Kharkov aviation school in 1961, he became a test-pilot. That was the period of Khrushchev's reforms which made him change military airplanes for helicopters. He says that he fell in love with helicopters when he saw such a machine for the first time. In the 1960s, helicopters were a novelty for the aviation and vibrated awfully. Once, lieutenant Zaitsev noticed that a helicopter becomes steadier and does not vibrate if a pilot switches to the autorotation regime when landing. He studied the peculiarity and arrived at the same conclusion that Spaniard Sierva did at the beginning of the century. Indeed, the maple seed autorotation regime was unique. Using the regime, Igor Zaitsev decided to design a helicopter for the Russian Air Force as based upon the principle.

In 1973, at the exhibition Aeronautics-73 in Moscow, Igor Zaitsev met with the son of Igor Sikorsky, the world's best aircraft designer and the founder of the world helicopter engineering. Sergey Sikorsky invited Igor Zaitsev to work with Sikorsky Aircraft in the US and said the company was working on machines that the Russian lieutenant was developing either. But Igor Zaitsev realized perfectly well that KGB would not let him go to the USA for work and refused to go.

When the Afghanwar broke out, it turned out that Soviet helicopters did not suit for waging a war. That was a period of busy helicopter testing for Igor Zaitsev, the head of the  flight test department. At the same time, he started working on his new helicopter.

Today, Igor Zaitsev has a helicopter that may be in the air at a height of 3-4 km almost silently allowing its pilot to report position data to weapon emplacements. When Igor Zaitsev resigned from the army in 1987, he sold his summer cottage, car and garage to build a helicopter he was dreaming about. He started working on the project together with several confederates.

The inventor made the new helicopter in 1991 and called it Boomerang. The machine drew attention of frontier services. Being experiences in mountain flying, Zaitsev knew it meant death for a pilot if the helicopter engine fails in the mountains. That is why he fixed two engines with independent propellers on Boomerang. The frontier services liked the new helicopter, but the Defense Ministry had not enough finance to adopt the invention.

Philippines invited Zaitsev to start production of his autogiros. The country is situated on 1,270 islands violently raided by pirates and suffers great losses as a result of such raids. The Philippines police needed Zaitsev's helicopters to know where pirates start from: the light and cheap helicopters designed by the Russian inventor would help the police be more effective. But Igor Zaitsev declined the tempting proposal as he still believed the Russian army would be a serious partner for him. But his project ruined when a wrong man was chosen for testing the helicopter especially for army generals. A pilot testing strategic Tu-22 hoped he would cope with Zaitsev's helicopter and did not know that autogiros are based on different principles. As a result, he could not operate the machine properly and stated the new helicopter would not do for the army. A bit later, he recognized the mistake but it was too late to save the situation.

At an air show in 1997, Igor Zaitsev demonstrated a new helicopter that was even better that the previous model. Rescue services, fire extinguishing brigades and foresters said they would like to have such a machine to make their work more effective. The designer says that today aerial reconnaissance is really very expensive: one-hour flight of Mi-8 costs $1,000-1,200 while a one-hour flight of an autogiro costs $10. Unfortunately, many people in Russia believe that cheap cannot be profitable, the inventor says.

Today, test-pilot Zaitsev no longer makes helicopters for the army but only for people who are still dreaming of flying in the skies. Recently, he demonstrated a helicopter with a controllable traction vector, the same that unique Russian fighters have. There is no other helicopter of this type in the world, Zaitsev says.

Rich Russians often want to buy the new autogiro to have comfortable flights to their villas or to make other neighbors feel envious. Once, some businessmen offered buying an autogiro. But the designer declined the proposal, as it turned out the businessmen wanted the helicopter for safe drug trafficking.