Mysterious failures in the electronic equipment of the space shuttle Discovery has put an end to the grand PR campaign, which American specialists were trying to conduct after the tragedy with Columbia. NASA spokesmen stated at the end of the last week that the launch of Discovery had been pushed back till September. The announcement means that celebrations to mark 30 years of the first US-Soviet space program have been left to the mercy of fate too. The symbolic reunion of Russian cosmonauts and American astronauts in space 30 years after the docking of Soyuz and Apollo is not destined to make headline news. 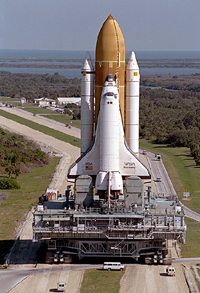 It is well-known that the grand project failed because of a tiny fuel sensor on Discovery's external fuel tank. It took NASA several months to prepare the launch of the space shuttle, but the widely-advertised event was postponed on Wednesday. Specialists from Florida-based Kennedy Space Center promised both the crew and numerous official delegations from ISS member countries to repeat the attempt to launch the space shuttle already on Saturday. NASA deputy shuttle program manager, Wayne Hale, stated Friday that most qualified engineers of the space agency had failed to solve the problem. Mr. Hale refused to specify the launching date, although other sources reported that Discovery could be launched in space at the end of the next week.

For the time being, Discovery still remains installed on the spaceport, where several teams of engineers are trying to unravel the technical mystery, checking the display data of the fuel sensor, the electronic system of the fuel tank and other parts of the chain 24 hours a day.

The fact that the shuttle is still sitting on the launching station proves that NASA is not going to give up its intentions. Discovery's pilot, Eileen Collins, said that the crew had been upset with the delay, although she confirmed that the mission would be eventually accomplished.

American specialists are currently developing a plan to launch the space shuttle Discovery in September of the current year. It is noteworthy that NASA originally planned to launch Atlantis - the second of the three remaining shuttles – in September as well. The so-called September gap – the period when the planet takes the most favorable position for a shuttle launch – will last from September 9th to 24th. Most likely, Discovery will be launched into space during that period, if NASA solves the mysterious fuel sensor problem. Atlantis will therefore reach the near-Earth orbit approximately in November, if nothing else fails.

In the meantime, cosmonaut Aleksey Leonov, the commander of the Soviet crew, which took part in the historic Soyuz-Apollo docking, has recently told reporters at a press conference that certain technical malfunctions, which took place prior to the docking of two absolutely different spacecrafts, were repaired immediately, within mere minutes. For example, when the switchboard of video cameras filming the docking process went out of order, the cosmonauts managed to repair them with the help of a pair of scissors, a knife and a piece adhesive tape. Such recollections seem to be somewhat scoffing against the background of NASA's futile efforts to fix Discovery and the excruciating expectation of the shuttle's crew on Earth and the ISS crew in space.