Scientists discovered mysterious circles on the area of the ancient Russian town of Arkaim, which is the same age with Egypt and Babylon

President Putin has recently visited one of the most mysterious places on planet Earth – the ruins of the ancient town of Arkaim, which is situated on the outskirts of the city of Chelyabinsk. Historians, archaeologists and ufologists have spent many years trying to unravel the secrets of the town. Which nation was living in Arkaim more than 40 centuries ago? How did people of such ancient civilization manage to accomplish incredible technological progress, which still seems to be unachievable nowadays? A group of Russian researchers, with Vadim Chernobrovy at the head, has recently returned from the mysterious region. The scientist said that specialists and students had built numerous tent camps around Arkaim. 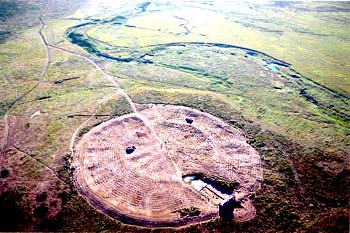 The Arkaim valley in the south of Ural was supposed to be flooded in 1987: local authorities were going to create a water reservoir there to irrigate droughty fields. However, scientists found strange circles in the center of the valley: the authorities gave archaeologists 12 months to explore the area. Scientists were shocked to find out that Arkaim was the same age as Egypt and Babylon, and a little older than Troy and Rome.

Gennady Zdanovich, the chairman of the archaeological expedition in Ural had to prove the scientific significance of Arkaim to regional officials. “We achieved what seemed to be absolutely unreal: the multi-million construction project in the region was shut down,” the scientist said.

Archaeological excavations showed that the people, who inhabited Arkaim, represented one of the most ancient Indo-European civilizations, particularly the branch, which is referred to as the Aryan culture. Arkaim turned out to be not only a town, but also a temple and an astronomic observatory.

”A flight above Arkaim on board a helicopter gives you an incredible impression. The huge concentric circles on the valley are clearly visible. The town and its outskirts are all enclosed in the circles. We still do not know, what point the gigantic circles have, whether they were made for defensive, scientific, educational, or ritual purposes. Some researchers say that the circles were actually used as the runway for an ancient spaceport,” Vadim Chernobrovy said.

Researchers discovered that the ancient town was equipped with the storm sewage system, which helped Arkaim's residents avoid floods. The people were protected against fires as well: timbered floorings and houses themselves were imbued with fireproof substance. It was a rather strong compound, the remnants of which can still be found in the ruins of the town. 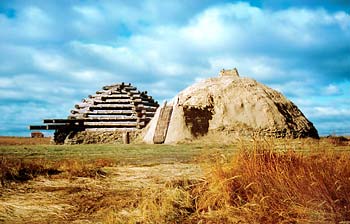 Each house was outfitted with “all modern conveniences,” as they would say nowadays. There was a well, an oven and dome-like food storage in every house. The well was branching out into two underground trenches: one of them was directed to the oven and the other one ended in the food storage. The trenches were used to supply chilly air to the oven and to the food storage. The cool air from the trenches was also creating a very powerful traction force in the Aryan oven, which made it possible to smelt bronze there.

The central square in Arkaim was the only object of square shape in the town. Judging upon traces of bonfires that were placed in a specific order on the square, the place was used as a site for certain rituals.

Arkaim was built according to a previously projected plan as a single complicated complex, which also had an acute orientation on astronomic objects. While archaeologists are meticulously brushing dust off ancient stones trying to recreate the lifestyle of Arkaim's residents, ufologists study mysterious phenomena, which they register in the town: inexplicable fluctuations of voltage, magnetic field tension, temperatures and so on.