A team of 40 engineers from the University of Cambridge and the Massachusetts Institute of Technology has unveiled a design for the concept plane SAX-40, a “silent aircraft.” The design is the result of three years’ work. The aircraft’s key design features look stunning, particularly to those who are completely unaware of any mysteries relating to aerodynamics. The concept is what is known as a Blended Wing Body design. The aircraft’s flattened and tailless body resembles the shape of a bat. The noise produced by the craft while cruising would stay within the range of noise caused by a washing machine, Reuter’s reports. 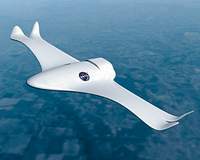 “The radical design of a new passenger aircraft has been unveiled. The aircraft’s technical characteristics are unlikely to look impressive to you if you’re not an aviation buff,” said Academician Valentin Belokon, an expert in aerodynamics with Tsiolkovsky Academy of Cosmonautics. “The aircraft weighs 150 tons; it takes off at about 900 km/h carrying 215 passengers. Well, there’s nothing special about the above features. The flight range is around 9,500 km, this one looks pretty extensive,” added Belokon. So what is so radical about the design of the new plane?

First and foremost, the SAX-40 can improve fuel economy by 35% compared with the most fuel-efficient contemporary airliner. The new aircraft seems to have good prospects for becoming a savior of the civil aviation, especially if airlines should pay the “green tax” on emissions of their planes.

“This outstanding fuel efficiency is undoubtedly the result of a most original approach in terms of design,” said Belokon. “The SAX-40 is the first passenger aircraft of a hybrid design that uses the wings of a conventional plane smoothly blended into a wide tailless body. As a rule, it takes a lot of effort to come up with this sort of concept design features. No doubts about it, the huge progress in the use of supercomputers helped the designers to complete the job faster than expected. The design of a plane is not based on prefab formulas, in this case it’s mostly a matter of art coupled with the power of computer experimentation,” said Belokon.

The joint British-American team took just three years to design an aircraft with the unusually high fuel-efficiency characteristics, which by 30% exceed those of the Boeing 787, the most economical airliner to date though it is still in the works. It took about 7 years to develop the supersonic Concord. The design of the giant double-decker Airbus A380 took 13 years to complete. “We do have an intrigue in this case,” said Belokon. “The new craft is a symbiosis of two ideologies, namely the sickle-like wing concept designed by the German company ARADO back in 1944, and design features used in our fighters Su-27 through Su-34, which marked an important step in the blending of wings into a fuselage (the above aircraft developed from 1969 to 1981). The SAX-40 is askillful adaptation of these ideas. Therefore, it’s a lot clearer now to imagine how a relatively small team 40 strong managed to come up with such a radical aircraft design,” said Belokon.

According to our expert, the sophisticated integration of wings into a fuselage enabled the designers to achieve an exceptionally high lift-to-drag (L/D ratio) of the airplane. The lift-to-drag of both Concord and Tu-144 is 7.5; while L/D of the Boeing 747 - 787 is in the neighborhood of 20. The SAX-40’s L/D is reported to be in the range from 25 to 27. So far there’s been only one series-produced aircraft that had a lift-to-drag similar to that of the SAX-40. I’m talking about the M-55, a Russian-built reconnaissance plane that had the L/D of about 25,” said Belokon.

Because the design of the SAX-40 does not need a tail, used to provide additional lift and stability on conventional craft, it also cuts down on turbulent airflow and noise from the back of the plane.

The wingspan of the SAX-40 measures 67.5 meters. The distance seems somewhat excessive for a relatively light plane, compared to a 68.5-meter wingspan of the Boeing 747 whose weight is 400 tons. However, a broader wingspan means a larger wing area. The three engines of the SAX-40 are embedded within the blended wing design with the air intakes on top. Besides, the output of the engines is channeled through what is known as a “variable area exhaust nozzle.”

The design has a number of other novelty features. For example, the landing gear of the SAX-40 would deploy at landing in a usual way yet the craft’s landing gear is designed to minimize both drag and noise. It would have fairings to cover the wheels and braking systems, creating as smooth a flow of air as possible. The craft would hold its nose up while approaching the ground at a speed of 350-400 km/h. The wings of a conventional aircraft have flaps to significantly improve the lift. The SAX-40 is flapless yet the leading edge of its wings is slightly dropped. The drooped design helps improve the lift of the aircraft and reduce its speed without using flaps.

It is obvious that taking one’s breath away was not the principal goal of the researchers and designers involved in the concept aircraft project. “The shape of the aircraft is a remarkable achievement in terms of aerodynamics. The two most important purposes of shaping the plane like this definitely have to do with significant fuel savings while cruising, and a smooth and safe landing,” said Belokon.

The designers of the new aircraft stress the point that the first passengers will be able to come aboard the SAX-40 in the year 2030 at best provided that the design is approved by manufacturers. It takes lots of funds and risks to get serial production of a new plane off the ground. Besides, new industrial facilities will have to be built for the purpose.