Residents of Siberia are surprised to find the seasons of the year become completely intermixed: the unnaturally warm winters are followed by the freezing months. 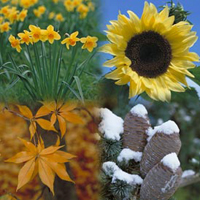 Meteorologists confirm the suspicions of amazed residents. The year 2006 stood out in particular: the snow finally melted three weeks later than usual. The vegetation period was also seriously delayed, while in August the temperature dropped so low that there were reports fo frost appearances.

Aleksandr Cherkashin, a professor and a researcher at the Sochava’s Institute of Geography, has developed a theory, which states that the natural cataclysms are a direct result of our actions – both good and bad ones. Modern man brutally disturbs the natural processes and by doing so alters the informational energy of the environment and of his own existence.

Ella Smirnova, who calls herself a healer and a prophetess, adds that each thought has its manifestation in the physical world, and every spark of negative emotions results in a negative energy outburst, which causes damage to everything within that area.

In times past people went to bed and got up with a prayer, and their relationship with the nature ran smoothly because there was harmony. These days people pour out on each others floods of cursing, swearing and cussing.