Thirteen petrified human footprints, which could be the most ancient traces of humanity in the American continent, were recently discovered in Mexico. 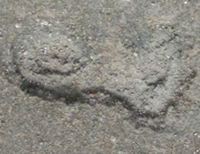 According to the archeological estimates the footprints’ age is approximately 10,000-15,000 years. However, not all agree with that number. The other alternative estimates the age to be 40,000 years.

USA Today reports that If the age of the footprints is verified by scientists the find would be a scientific blockbuster, rewriting the story of human migration into the New World.

According to the current theory the first humans arrived in North America 13,500 thousand years ago, crossing a land bridge from Asia into what is now Alaska and spreading quickly across the continent.

The discovery of the marks preserved by volcanic ash in an abandoned quarry in Mexico and belonging most likely to the ancient hunters was made in the Coauila Desert.

An even earlier discovery of the prehistoric human traces in the Western hemisphere aging 13 thousand years was made not too long ago in Chile.

The oldest footprints on the entire planet are located in Laetola, Tanzania, and their age is estimated to be 3.5 million years.