The most creative designers have come up with a special device to let women know about the best time to have sex. An amazing new mobile phone is now available through Japan 's NTT DoCoMo Inc. It can ring to let would-be mothers know when they reach the most fertile part of their monthly reproductive cycles. 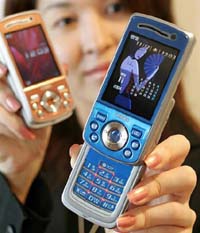 According to Reuters' reports, by tapping in data on menstruation dates, the female user can program the phone to alert her three days before ovulation and again on the day. However, the company warns that the calculations are based on average cycles.

The new phone was invented after Japan's fertility rate - the average number of children a woman bears in her lifetime - fell to an all-time low of 1.25 in 2005, sparking worries about a shrinking population.

The phone also has the ability to recognize its owner and automatically lock when the person gets too far away from it. In addition it can be found via satellite in case you lose it, Mobile Guerilla reports.

The phone was the idea of female designer Momoko Ikuta, who also provided it with a pastel paisley look that women tend to enjoy.

The handset provides several other functions designed to appeal to women, such as a recipe database and a button on the side that sets off a "camouflage melody", allowing the user to avoid unwanted attention by pretending to receive a call.