Mysterious miniature creatures could reign on Earth 20,000 years ago

Remains of miniature people found on the Indonesian island of Flores 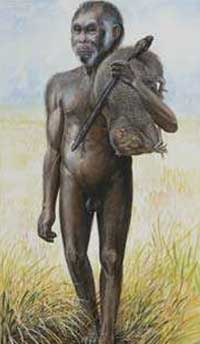 Mysterious miniature creatures could reign on Earth 20,000 years ago

The little creatures stood just three and a half feet high, and their heads were the size of a grapefruit. Despite their pretty small brain size, the Floresians seem to have made sophisticated stone tools. The remains unearthed on the Indonesian island have been something of a headache for paleoanthropologists over the last two years. According to US journal Nature, the remote island of Island is the “Lost World.” The description is very accurate: you feel like being transferred to a locale that exists in another dimension once you set foot on the island. The animals akin to those that now can be seen only in horror movies lived in the jungles of the island some 18,000 years ago. The animals included giant rats – as big as rabbits – and pygmy elephants that resembled horses in stature. As it turned out, the island was populated by other species too. In October 2004, an excavation team unearthed the remains of eight human beings of rather short stature and small brain volume in the Liang Bua cave on the island of Flores. A number of stone tools including knives, shovels, and needles were found next to the skeletons. Researchers made sensational announcements claming that the “new human-like species” probably belonged to a mysterious Lilliputian race that became extinct due to unknown reasons…

The dragon stories are made of the pterodactyl bones

“They found the skeleton over there,” says the curator Manuel da Silva while pointing to a nondescript piece of rock in the corner of the Liang Bua cave. “At the beginning they believed it was the remains of a ten-year-old boy because the skeleton was so small. However, further lab examinations showed that the skeleton was estimated to belong to a woman in her thirties. Somebody dubbed it the ‘Hobbit’ after a character in the Lord of the Rings movie, which was all the rage at the time,” says da Silva.

According to Jan der Maas, a Belgian professor who has been examining bones of the Hobbits in a mobile laboratory for the last ten months, the tiny people came into being on Flores about one million years ago. “We don’t seem to be paying enough attention to the event. It’s a shame as far as I’m concerned,” says he. “Perhaps a most important discovery is waiting in the wings. Any of us is aware of the myths of dwarves featuring short creatures who stood guard over the treasure hidden underground. The Floresians also lived in the deep caves. Remember those dragon tales dating back to the Middle Ages? In fact, they started circulating around after some French peasant came across the bones of a pterodactyl. Likewise, the European tales about gnomes may have been put together following the discovery of miniature skeletons. By the way, there’re similar legends regarding Flores . Back in the 19th century, Portuguese researchers reported that the aboriginal people of the island had believed in the existence of ‘ebo gogo’, a tribe of ferocious dwarves hiding away in the jungles,” says der Maas.

“I’m really surprised at all that fuss over the discovery of the ‘Hobbit’,” says Musa Muhammad, a researcher at the State University of Jakarta. “Scientists have long maintained that living things could undergo gradual physical shrinkage due to a insufficiency of food resources on islands. There was a shortage of food for the elephants, and therefore their dimensions became smaller. On the contrary, there was plenty of food for the rats, and they consequently turned into bigger species over the period of several thousand years. The same applies to man. Take a look at the African pygmies, for example. They look like gnomes. Food shortages have always been a big problem in the desert. In any case, there are lots of versions concerning the discovery. We’re expecting thearrival ofresearchers from Australia shortly. The Australians will check the cave for the signs of radiation. One of the theories says that the mutations of humans and animals on Flores may have been caused by exposure to high levels of radiation produced by something like a powerful nuclear blast.

Scientists are yet to find out whether it was the fall of a meteorite or some other incident. As for the rats, a similar mutation process was reported on the atoll of Mururoa in the Pacific. The atoll was used by the French for testing nuclear bombs. The rats not only survived the tests, they grew twice as large due to the effects of radiation,” says Muhammad.

Midgets were defeated by modern humans

The Flores discovery is still a matter of the heated debate in the scientific community. The entire theory of human origins with regard to Homo sapiens will have to be revised should irrefutable evidence be found to prove that the little Floresians were in fact an ancient human race. Homo sapience is thought to have arrived about 25,000 years ago. And the moderns may have competed with other species; those who stood just one meter tall, had a very small brain volume, and made sophisticated tools, which they used for hunting pygmy elephants and giant lizards. One of the theories maintains that the prehistoric Lilliputians originally populated at least half the planet but eventually were exterminated by the race of modern humans.

However, many scientists are quite skeptical about the fossils found on Flores. In May 2006, a team of scientists led by Dr. Robert Martin was commissioned by the journal Science to carry out a thorough examination of the bones of the “Hobbit.” An article, published by the journal after the completion of the research, claimed that the sensation was largely exaggerated. According to the findings of the study, the little creature was affected by a rare disease, which reduced his brain to one-third human size. If so, what about the other seven skeletons found on location, asked Professor William Jangers at the University of New York shortly after the results of the study were released. Can it be that other residents on Flores were stricken by the disease? The fossilized bones of a human-like creature unearthed in the cave of the island of Sumatra put more fuel into the debate. The Sumatra creature is estimated to have stood less than one meter tall. In other words, the find may indicate either the ability of the Floresians to build boats or the existence of several highly developed dwarf peoples at a time.

Apart from the diminutive stature and small brain volume of the Flores man, some of his organs were built differently e.g. joints of the upper extremities and a scapula (shoulder blade). The Flores man is also believed to have had hair on his soles. It is still unclear what may have caused the disappearance of the little Floresians. The latest research shows that the skeletons of all the “Hobbits” were melted at edges. New research will be aimed at detecting the presence of radiation in the remains.

Professor Jan der Maas shows me a little piece of the bone kept inside a bulletproof cover. The bone looks really small, not larger than a child’s hand. “We’re really stressed-out now. We have to deal with dozens of delegations dispatched by U.S. and European societies for the study of anomalous phenomena. Many of those visitors try to convince me that the mystery of the Floresians boils down to earthquakes, which occur quite frequently in Indonesia . They claim the island of Flores may have been a separate continent before its larger part went down in the ocean following a powerful earthquake,” says der Maas.