Norwegian paleontologists stumbled upon a burial ground of Jurassic period. 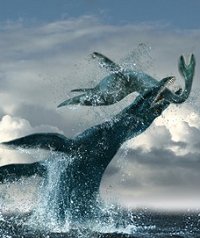 Skeletons of ichthyosaurs and plesiosaurs, which were discovered on the spot, were not only huge also whole, and most were almost completely intact.

Both species once upon a time lived in a large body of cool deep water where they were the top predators.

Ichthyosaurs were air-breathing creatures, well-adapted to the water, but moving and looking much more like fish and plesiosaurs were the carnivorous giraffes of the sea.

Suddenly both sea dragon species died out in the Cretaceous period after reaching their highest diversity. The burial place is located half-way between Norway and the North Pole.

The fossils appear to have been underground for 150 million years. One of the skeletons was nick-named “Monster” because of its colossal size.

Its neck vertebra was the size of an average plate while its teeth reach the length of a large banana. Monster’s body length was estimated to be 8 meters.