Goats stood at dawn of revolution

Goats accompanied the ancient farmers on their way to Europe. Scientists say that these animals helped humanity to reconstruct the primitive communal order, thereby profoundly affecting the Neolithic revolution of antiquity. 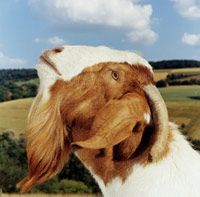 Goats stood at dawn of revolution

Goats – animals very tough and very mobile - are able to eat practically anything that grows. It was precisely these creatures who according to the geneticists kept the ancient settlers company when they migrated to Europe from the Middle East, PNAS reports.

The dawn of agricultural rise (the so-called Neolithic Revolution) when humanity began farming rather than hunting and gathering happened between the 8th and the 6th century BCE. To this day nations are trying to solve the consequences of that crucial migration.

Sudden growth of population with all the side-effects it brought about initiated the negative influence upon the ecological conditions in many regions of our planet. Overextended pasture use, for example, led to savannahs turning into deserts in Northern Africa while the “uneducated” agronomic practice led to the salification of the interstream area.

If during the Stone Age people simply took from Mother Nature what it had to offer (such as plants and animals), now they began creating things that did not exist before (artificial selection of plants and breeding new types of farm animals).

It was precisely that change in the main form of production activity that influenced the initial development of social differentiation, whose archeological indicators are monumental architecture, hierarchy of settlements and advancements in art.

Research based on the DNA analysis helped track the origin and the transportation of the goats during human migrations.

Scientists have discovered that the DNA differences among the goats bred on various continents are much less significant than those among cows, pigs and sheep. Experts concluded that the goats were transported much quicker and much more frequently than other animals.

“Genetically African farm animals is very distinct from the ones in Europe , escpet for the goats who moved along with the people,” noted Pierre Taberlet from the Alps Ecology Laboratory at the French University of Joseph Fourier.