Signs of technology detected on Mars

Signs of technology have been detected on the Martian surface. However, the “little green” owners are yet to be found from an orbit. 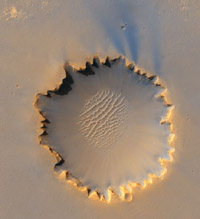 Signs of technology detected on Mars

Right now American Mars Reconnaissance Orbiter, the most precise machine to have come to Mars from Earth is circling around the Red Planet. Its optical capacity allows it to spy out from the smallest things, including living creatures, if such were to be scattered on the planet’s surface, from the distance of 300 km.

The new spying device caused the UFO enthusiasts some grief. Their last hopes for an artificial origin of the artifact known as the “Face on Mars” were destroyed by the recent photographs that the machine took while cruising near the surface.

And now the Orbiter has taken another unique shot. From the 275 km distance it detected and photographed its fellow American Mars rover Opportunity, which just a couple of days ago reached the huge crater Victoria (800 meters in diameter and 70 m in depth). The snap shot also caught some wheel tracks, which the rover left when it was looking for a more comfortable climb-down into the crater.

Rover’s moving trajectory is of interest because it refutes another hypothesis of the UFO enthusiasts. It was originally planned that Opportunity and its co-explorer Spirit would spend no more than three months on the surface of Mars. According to the scientists local sand storms would have covered their sun batteries with sand during that time, and the machines would die without the necessary energy supply.

However, the pair has been rolling around in teh sand for the past two and a half years. Some hotheads have concluded that the sand gets dusted off by the aliens who mock the Earthlings by supplying the machines with fake images of an “uninhabited” planet.

Unfortunately no alien tracks were detected near the rover on the snapshot taken by the Orbiter. Now the skeptics are eagerly awaiting another orbit photo session of a second mysterious region.

In 1976 another device Viking-I took a photograph of a strange object on the Martian plain Chryse Planitia, which according to many resembled a flying saucer dug into the sand. What is curious is that the object was not there in 1965 when the same area was photographed by yet another earthly probe Mariner-4. But then again it took pictures from a distance of 10 thousand km.

“Let the Orbiter investigate the region in great detail,” demands the anomaly-expecting public. And the NASA scientists respond, “We have our own serious program. We don’t listen to alien chasers.” But they do promise the photographs from the Chryse plane.