USA's Discovery Shuttle will finally relieve the ISS of bulky equipment and scientific containers, which were accumulated there during the 2.5-year moratorium on shuttle flights

The International Space Station is to dock with the US shuttle for the first time in two and a half years, a spokesman for the Mission Control said. “Russia's Progress M-53 spacecraft lifted the 184-ton orbital ISS complex for about two kilometers for the creation of optimal conditions to dock with the Discovery Shuttle,” an official spokesman for the Mission Control, Valery Lyndin said. “The maneuver was successful, the International Space Station is currently staying at the average height of 353 kilometers, on the so-called work orbit,” added he. 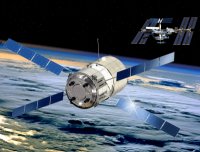 ”Sergei Krikalev and John Phillips opened the entrance to the pressurized transition compartment on the US segment of the station for the first time in several years. The compartment will be used as a warehouse for the cargo delivered by the shuttle,” the Mission Control said.

The pressurized container cargo module will be docked to the compartment with the help of manipulator. The ISS crew checked the work of the docking mechanism and installed a video camera in the compartment to film the docking and the unloading process, Itar-Tass reports. The crew also cleaned the transition adaptor, to which the Discovery Shuttle is expected to dock. The adaptor was used as a place to store rubbish in, the Mission Control said.

Krikalev and Phillips will load various equipment on board the shuttle to send it back to Earth. Spokespeople for NASA and Mission Control said that numerous containers of bulky equipment and boxes with results of scientific experiments had been saved on board the ISS during 2.5 years of moratorium on shuttle flights. Shuttles used to take the equipment back to Earth on a regular basis before. There are currently more than ten nonexpendable  automatic docking systems on board the Space Station.

Krikalev and Phillips also conduct trainings to control the security of the shuttle flight from the ISS. “There will be two US digital cameras used for it. The Progress cargo craft delivered the cameras to the station on March 2nd. The Discovery Shuttle is to make a nose down maneuver and fly with its bottom up at some 180 meters underneath the ISS. Krikalev and Phillips will be taking pictures of the heat-shielding facing of the US shuttle, from nose to tail, within 90 seconds,” the expert said.

The damaged heat-shielding facing resulted in the crash of the Columbia Shuttle as it was returning to Earth on February 1st, 2003.

The correction of the ISS orbit was supposed to be conducted in May for the docking with the Discovery Shuttle. However, NASA delayed the launch of the shuttle, but the orbit of the International Space Station was corrected anyway to dock with the Progress M-53 cargo craft. The docking was completed successfully on June 19th.

NASA plans to make the final decision regarding the launch of the Discovery Shuttle this week, Newsru said.