According to the Russian astronomer Nikolai Fedorovsky, a giant comet flying at top speed is bound for Earth. Should the comet stay on the collision course, it may hit the planet in late October. The impact will cause devastating tsunamis, earthquakes and avalanches, says Fedorovsky. He saw the killer comet in a telescope two weeks ago. He managed to calculate the comet’s trajectory. We got in touch with Nikolai Fedorovsky: 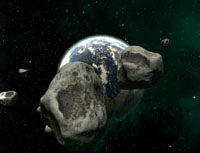 “Just a few people are aware of the fact that comets of various sizes fly past Earth at a very close distance on a regular basis,” says Fedorovsky. “Those comets usually pass by unnoticed. The above circumstance is not a guarantee against disaster by any means. The Tunguska meteorite landed in the wilderness of Siberia. What if the behemoth had plunged into the center of Europe or somewhere in the ocean?

“I’m not trying to scare anybody, I just want to warn the public,” sums up Fedorovsky. “We should pay attention to this suspicious celestial body. We could obtain more accurate calculations if other astronomers join forces. We could also photograph it if we’re in luck. We will probably partake in one of the greatest events in the history of humankind,” adds he.

“We shouldn’t underestimate the threat poised by asteroid and comets,” says Igor Gerasimov, deputy director of the Sternberg Astronomical Institute. “More than a thousand meteorite showers cross Earth’s orbit and pose a real threat to life on the planet. We’re watching only nine showers of the above number. Those nine have several dozen objects, which may collide with Earth. The size of the objects varies. Some of them are tiny dust particles while the others have the proportions of gigantic heavenly bodies measuring up to 200 meters in diameter.”

The solar system has about two million asteroids measuring more than 50 meters in diameter in. About 4,000 asteroids of the above category have been discovered so far. The number of those under monitoring is even smaller. In fact, many asteroids and other celestial bodies remain unnoticed until they approach Earth. One of such asteroids was discovered in the process of examination of a picture taken by Hubble Space Telescope in 1998. Some of the asteroids come into view shortly after passing past Earth into the Moon’s orbit. About a dozen asteroids approach Earth presently. They measure more than 5 km in diameter. Scientists estimate the above celestial bodies may collide with Earth once every 20 million years.

Soon there will be 500 asteroids (over 1 km in diameter) approaching the planet Earth. An asteroid like that may fall Earth once every 100 000 years. A global catastrophe is very probable if the thing really goes down in flames.

The possibility of a chance meeting with smaller celestial bodies is much greater. Earth will be covered with the “space burns” (craters measuring hundreds of kilometers across) as a result of such an encounter. Small fragments of asteroids (one-meter pieces, rocks and dust particles) hit the ground all the time. Fortunately, they do not cause any substantial damage. The biggestproblem is that celestial bodies show up at a very short notice. Needless to say, they come out of the blue with no exact specifications attached. Therefore, the risk of a sudden collision would be a lot higher of the astronomers stop monitoring potential troublemakers.

“The geochemical and paleontological data shows that a celestial body about 170-330 km in diameter collided with Earth in the northern part of the Yukatan Peninsula some 65 million years ago at the turn of Cretaceous period of the Mesozoic era,” says Academician Alexei Rozanov, director of the Institute of Paleontology of the Russian Academy of Sciences.

“The crater called ‘Chiksulub’, 180 kilometers in diameter, is a mark of the impact.

The capacity of the blast is estimated at 100 million megatons. A huge amount of dust totaling one million tons was thrown into the atmosphere during the blast. Consequently, a six-month night fell over the planet. More than a half of all existing kinds of animals and plants perished. The global winter that followed may have killed the dinosaurs,” adds Rozanov.

“There’ll be more reports about new asteroids spotted in the vicinity of Earth. However, it’s not doomsday or anything of that kind. It’s just a sign of the solar system’s usual life,” says Igor Gerasimov. “A network for uninterrupted monitoring of celestial bodies was set up to protect Earth against the consequences of unwanted visits. Robotic telescopes watch the sky round the clock. Several observatories in different countries including Russia make part of the network,” adds Gerasimov.

Let us assume that a potentially dangerous object has been located, and it is heading Earth. What shall we do? There are a number of plans for the occasion. However, the implementation of those plans will require a higher level of technology, not to mention the funds. One of the plans involves the physical destruction of an object (see the 1998 movie Armageddon for further references).

Scientists also suggest that an object’s descent trajectory be changed. Part of the object should be covered with chalk to attract more sun beams to the latter. The move is thought to be able to change the speed of the object and the direction it rotates. Predictably enough, the amount of chalk is the biggest stumbling block. According to estimates by American scientists, 250 thousand tons of chalk would be needed to change the orbit of the asteroid dubbed “1950 DA.” Besides, as many as 90 booster of Saturn-5 type would be required for carrying the chalk to the object. Well, it still looks very sci-fi.

As for the “Fedorovsky asteroid,” all the above scientists believe the report is either a mistake or exaggeration. “We’ll surely see more reports like that in the future. But we shouldn’t fly into a panic each time we see another doomsday being announced in the press. Let’s keep our fingers crossed and hope that the thing will fail to hit our planet,” says Igor Gerasimov.