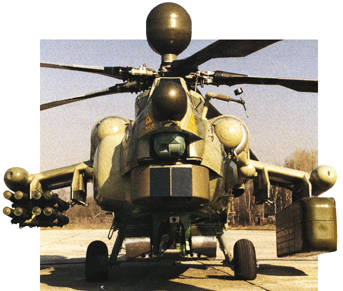 “Four or five more units” of the Mi-28N type helicopter are being built these days as a series of flight test is still under way, according to Gen. Mikhailov. The Night Hunter will gradually supersede the Mi-24 combat helicopter currently in service with the Russian Air Force. The Mi-28N is designed to search and destroy enemy tanks and other armored targets. It is also designed to search and destroy enemy air targets and troops on the ground. The helicopter was developed by Moscow's Mil helicopter plant using Mi-28 combat helicopter. The lot production preparations had been completed for the Mi-28 at the Rostvertol plant.

Developers of the new helicopter at the Rosvertol plant aimed at using technological production equipment of the Mi-28 to capacity and therefore the new helicopter underwent minimum modifications with regard to its airframe, control and armament systems, active and passive defense system. Major modifications were carried out on the power plant, load-bearing framework and on-board electronic equipment. The Mi-28N is capable of conducting daylight or nighttime all-weather operations at ultra-low altitudes utilizing landscape conforming navigation in both manual and automated modes. The electronic equipment enables the crew to have on-board access to electronic cartographic data and has 3-D landscape image synthesizing capacity. The target searching, 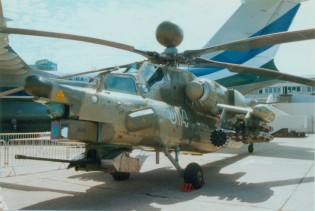 Data provided by on-board radar and infrared system are shown at color LCD indicators mounted in the cockpits of a pilot and a navigator/weapons operator. The helicopter is capable of flying at ultra-low altitudes ranging from 5 meters  to 15 meters. According to Gen. Mikhailov, the Russian armed forces are planning to purchase 300 Mi-28N's by the year 2010. He added that the Rosvertol company had built an excellent helicopter over a short period of time. He said that “production cost of the new helicopter is not high.”

Mr. Mikhailov promised that 50 new helicopter would be delivered to the Russian army for the time being. “The Mi-28N is one of a kind as far as foreign combat helicopters are concerned, it is the world's most advanced combat helicopter at the moment,” said he.