Scientists discover where ghosts come from

Swiss doctors have been able to solve the mystery behind hallucinations while treating for epilepsy a 22-year-old female patient with no history of psychiatric problems. 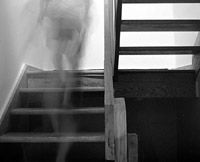 Scientists discover where ghosts come from

During the electrical stimulation to certain brain areas doctors touched a spot known as the left temporoparietal junction, which is responsible for coordination. Cosmos Magazine reports that when this happened the woman claimed that she saw a ghost who was mimicking her every movement.

Though the feeling was artificially produced, she did not recognize the ghost as an illusion. According to the woman’s account when she would try to sit up or lean forward the “shadow person” copied her pose and embraced her in his arms - a feeling she described as “unpleasant.”

Olaf Blanke, the co-author of the study conducted by a team of researchers from University Hospital in Geneva, Switzerland, says that the electrical stimulation repeatedly produces a feeling of the presence of another person in the patient’s extra-personal space. Blanke and colleagues concluded that the patient was experiencing a perception of her own body resulted from the corrupted data collection by the brain.

Since the strange sensation of someone’s presence, an experience of one’s actions being performed by another and the perception of a different self appear to be the results of electrical brain stimulation, scientists are led to believe that their discovery might help shed light on brain processes that contribute to the symptoms of schizophrenia.

They could also explain the origin of paranormal experiences such as ghost and UFO encounters.