All humanity derived from common root in African homeland

Scientific world has finally reached the conclusion that all humans have the same roots and the same place of origin. First Russian archeological expedition going to Northern Iran is hoping to discover world’s most ancient human remains. Scientists will perform field researches in order to determine the oldest location bearing evidence of ancient human migration from Africa. 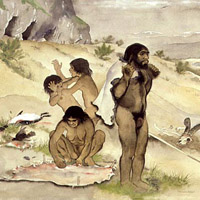 All humanity derived from common root in African homeland

“The expedition will head off tomorrow. We will lead field research in four Northern Iranian provinces with an aim of finding certain places that still bear witness of human ancestors’ migration from Africa into Eurasia. We are then planning on leading a 5-10 year stationary research at those locations,” graduate Anatoliy Derevianko told “Novosti.” Derevianko is the director of the Siberian department’s Institute of Archeology and Ethnography and the head of the planned expedition.

According to Derevianko the scientific world has come to a realization that all humanity has the same roots and one common place of origin, which is Africa. All archeological, anthropological and paleogenetical data clearly point to this fact, he is convinced.

“The most ancient human remains in the world as well as the stone tools found near the remains are in the eastern part of Africa. Paleogenetic clues also testify that all humanity has the same beginning, and its origin is precisely in Africa ,” the scientist claims.

Approximately 1.8-2 million years ago man left Africa and began settling in Eurasia. Iran was the main territory of transition during the times when the settlers were starting to inhabit Asia and to some degree Europe, Derevianko explained.

“In the past 15-20 years many interesting discoveries were made at the locations adjacent to Iran – in Eastern Georgia, Azerbaidzhan, and Russia (Dagestan). In particular human remains were discovered that date back to 1.6-1.8 million BC. Therefore the territory across Iran has been most important for solving the question of man’s spreading into Eurasia,” the scientist added.