A stone block found in the state of Veracruz in Mexico bears 3,000-year-old writing previously unknown to scholars, according to archaeologists who say it is an example of the oldest script ever discovered in the Western Hemisphere. 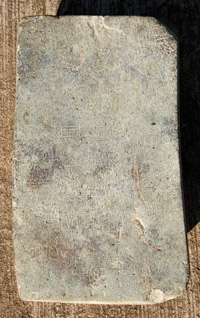 The stone is carved with 62 symbols, some of which appear to be depictions of maize, an animal skin, a fish, and a dart tip. They appear in groups that run horizontally, and some are repeated. It is not known what the text means, Boston.com reports.

Scientists may never be able to translate the text unless they find many more examples of Olmec writing, said archaeologist Stephen Houston of Brown University, a co-author of the report published today in the journal Science.

Scientists had not previously found any script unambiguously associated with the Olmec culture, which flourished along the Gulf of Mexico in Veracruz and Tabasco well before the Zapotec and Maya people rose to prominence in the region.

The inscribed stone slab was discovered by husband and wife archaeologists Maria del Carmen Rodriguez, from the National Institute of Anthropology and History of Mexico, and Ponciano Ortiz, from Veracruz University, chron.com says.

This find lights the hope of future discoveries of written records detailing the Olmecs, the likely creators of the block and the ancient civilization that in many respects was the progenitor of all later complex societies in Mesoamerica, such as the Maya and the Aztecs.

"This reveals the Olmecs, in many ways the first civilization in a vast part of the ancient Americas, were literate, which we did not know for sure before, and hints that they were capable of the same large-scale organization assisted by writing like you saw in early Mesopotamia or Egypt," researcher Stephen Houston, an archaeologist at Brown University in Providence, R.I., told LiveScience.