Scientists from the Russian Institute of Criminal Investigation have completed a series of analyses on the Shroud of Jesus Christ. 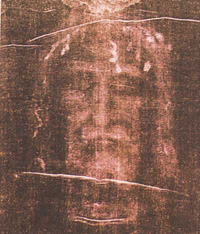 According to the tradition this piece of linen was the Savior’s burial cloth that miraculously preserved an impression of his body and face.

The image was reflected with such clarity that the scientists could point out traces of the horrible wounds. The material piece captured them like a negative slide – it resembled a photograph that is two thousand years old! Experts from all over the world are struggling to solve the mystery of the “Fifth Gospel,” as the believers call the Shroud of Turin. They are now joined by the criminal scientists of the Russian Federal Security Service, who have led a series of experiments revealing the circumstances of Christ’s execution.

Specialists from FSS intentionally avoided the religious interpretations concerning the Shroud. Instead they decided to analyze it as physical evidence from the actual crime scene. Research was led by Anatoliy Fesenko, doctor of Technical Sciences, who had been the head of the Criminal Investigation Institute for quite some time.

“Our research was complex; it involved overlapping findings in chemistry, physics, mathematics and biology,” the professor explained, “In the beginning we established the possible age of this fabric by remodeling the aging process. Our conclusion showed that the American scientists who had previously calculated the item’s years incorrectly gave it half its actual age. In actuality it is indeed no younger than 2,000 years.”

FSS experts were able to use the cloth’s traces to determine the nature of Christ’s wounds inflicted prior to his death. Their discoveries helped them reconstruct the Savior’s passion.

“The clue we examined preserved some material evidence about the abused victim,” clarified Anatoliy Fesenko, “The long linen cloth measured 4.3 by 1.1 meters contains faintly showing yellow-brownish imprints of two projections of a nude male body - back and front. Careful examination of all imprints confirms that the man depicted there was beaten with five-tailed thongs that had plubum spikes attached to them.

The right shoulder bears a wide stripe indicating that the victim could have been carrying a heavy object, possibly a cross. The nasal bone is broken from a punch on the left-hand side. The left cheek is swollen – it was in contact with the shroud and left a much greater imprint than the right cheek. The chin is clearly marked, especially on the left side. On the right it has a stain produced by a stream of blood or by a deep wound. The image of the face in general is asymmetrical. The man must have suffered an agony because his facial features did not contract evenly after his death.

His arm right below the wrist contains a large stain from a wound. Hands and feet havethesametypeof wound. The shoulders are raised. The chest has a shape characteristic of those who died due to suffocation.

His chest also bears marks of a rib area wound whose circumference is 4.5 cm. The left arm also has a wound and small blood clot. The right arm cannot be seen because it was beneath the left one.

Both wrists are darkened by the rich blood amounts from the wounds that pierced them through. Nails were driven through the center of the wrists between the bones, not through the palms, as it is commonly believed. Both wounds are visible on the feet. Their contours are very clear because their blood had clotted long before it touched the fabric. In one place the edges of the blood stain are indented; by spreading further along the cloth’s threads some liquid made the edges lighter. This spot is from the ichors that spilled out of the wound once the body was taken down: a half-dried cut was disturbed again after the nail was pulled out.

FSS Experts reconstructed the processes that would take place within the linen fibers upon coming into contact with human flesh. And not just any flesh, but a flesh of man exhausted from tremendous physical burdens, brought to death through prolonged intense torture and then buried according to the canon of Jewish tradition.

A volunteer from the Institute’s workers’ team - a man with long hair, mustache and beard – spend several hours sweating in a gym until he nearly exhausted himself. Afterwards he was covered with a linen cloth similar to the actual Shroud and was kept underneath it for several hours more.

“We have analyzed this experiment with great precision,” reported Fesenko, “This organic material contains various proportions of combined cellulose and lignin, which, when exposed to acids produced by a human organism and heated up, turns into substance very complex in its chemical composition and structure. When it is brought to a particular temperature the normally colorless lignin becomes yellow-brownish in color. If the temperature is raised even higher – it turns dark-brown.”

“Experiments have helped produce an almost identical reflection of the object upon the linen fabric. The man’s portrait was very accurate, nearly a photograph,” he continued, “We have also noted that the image is projected not because the cloth sticks to the face but because of the evaporation, diffusion and further fixation of the emitted fumes. This explains the unusual nature of the depiction on the fiberish cloth surface.”

The conclusions drawn by the FSS could be considered a sensation. The Shroud of Turin is far from being a fake. It naturally preserved an image of a crucified man, whose wounds accurately match those of Jesus Christ described in the Bible.