The first telephone line for calling outer space was brought into operation in the United States on February 27th, 2005. Anybody who feels like calling aliens can dial 1-900-226-0300 and talk as much as he can at $3.39 a minute. A powerful transmitter will relay the call to space via a parabolic satellite dish, which is 3.5 meters in diameter. 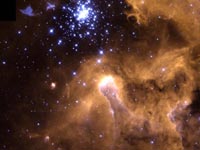 Thousands of telephone calls have been transmitted to space since the day when the line became operative. The average duration of a call was about three minutes. The system providers intend to widen a range of services in the future. The users would be able to send to space their amateur movies, e-mail messages and digital pictures.

Christopher Rose at the Ruthgers University sees little prospect of success of the project. According to his calculations, the signal’s output capacity of the “interstellar phone” is too low for reaching the stars above. Good reception can be guaranteed only within a distance of two light-years. However, there are more than four light-years between Earth and the nearest star.

“Unfortunately, there’s not much hope that somebody will ever get hold of messages sent by the users of that communications system,” says Rose.

Indeed, not a single caller who used the new telephone system has received any return call so far. Aliens could have called the earth dwellers if they really wanted to do so. The ufologists are aware of some telephone calls of mysterious origin. The calls seem to be directly related to the appearance of aliens.

“Our telephone began to ring at 10.30 p.m. on February 27th,” writes Alena Kugach, from the town of Kamushlov in the Urals, in her letter to a local newspaper. “My dad picked up the receiver but he heard no one speaking. Then there was a wave of interference coming over TV set. I looked out the window and saw some egg-shaped object floating from the north to the south. It was a captivating sight. Then the object stopped moving. It was shaped like an UFO. It had a ray of light streaming downwards. I watched the object for several minutes. Eventually, it vanished without a trace in no time,” reads the letter.

The other case features an eerie telephone call that came shortly after an UFO vanished into thin air. One of the eyewitnesses picked up the phone and heard a dry metallic voice speaking the following: “Did you like the show? Do you want to see some more?”

The well-known quantum physicist Jack Sarfatti heard a similar voice on the phone some 50 years ago. Sarfatti believes he could owe his scientific achievements to the telephone calls from the UFOs!

“It was back in 1952 or 1953. I was 12 or 13 at the time. One day the telephone rang in my house. I grabbed the receiver and heard a metallic voice on the other end of the line. The voice introduced itself as a computer onboard the UFO. It told me the aliens wanted to show me a couple of things. It was up to me to make a decision. I remember shivers running down my spine. ‘Gee, that’s for real,’ I thought to myself. So I said: ‘Count me in’,” says Sarfatti.

Sarfatti told his friends about the strange call. A few of them gathered in his bedroom, waiting for another “contact.” But nothing happened. In the end, Jack’s friends accused him of making up the whole story.

Sarfatti’s recollections of the incident come to a halt at this point. However, his mother says that the murky calls kept pouring in.

“My mom does remember things that happened thereafter. Looks like I forgoteverything. According to her, it lasted for several weeks. I kept receiving calls from the same source. My mom says that my behavior was real weird, and she was kind of concerned about me. Finally, she picked up the receiver one day and heard the same metallic computerized voice saying something… She just said: ‘Leave my son alone!’ and slammed the phone down,” says Sarfatti.

John Keel, a ufologist, has long noticed that the mysterious calls were something akin to a “business card” pertaining to a surge of activity of UFOs. Besides, he claims that the aliens’ metallic voices can unnerve the researchers and journalists. There were some reports about telephones ringing while being disconnected and with a receiver not resting on the cradle. The above cases took place in the areas affected by the mysterious phenomenon.

The dossier compiled by Bud Hopkins, a researcher of mysterious disappearances blamed on UFOs, has a number of unexplained cases of the kind. One Debbie Jordan was reportedly snatched by aliens several times. According to her, a series of strange calls started at the time when she was carrying her second child. The first call came in on Wednesday afternoon. Debbie picked up he phone and heard some industrial noise as if it was coming from “a steel works at the heat of the day.” She could also hear some voice moaning and gibbering illegibly. The lady thought that it was some kind of a stupid joke, and hung up. Soon she forgot about the incident.

She received a similar call one week later, about 3 p.m. A moaning voice could be heard amid the strange noises in the background. She listened to it for a few seconds, and hung up. The same calls had been kept coming in at about the same time ever since. Debbi would normally hang up the receiver after picking it up. Sometimes she would pause and listen to the noises.

One day Jordan’s mother picked up the phone and heard the “guttural sounds and moans with some clangor in the background.” On the other occasion Debbie attended to the call and heard a voice. Both Debbie and her mother use a range of terms to describe that voice. It sounded somewhat irritated, upset, or neutral. The voice was conveying a monologue, which was utterly illegible. It was unclear whether it was a man or woman speaking on the other end.

At last, Debbie made up her mind to change her telephone number without putting it onto the public telephone directory. She was given her new number on Monday. Nobody was aware of Debbie’s new home number yet she received another mysterious call on the following afternoon. The caller sounded pretty upset at something. It was the only time when the call came in early i.e. not on a regular time on Wednesday.

The telephone kept ringing for nine months, the entire period of Debbie’s pregnancy. One day they stopped altogether. Everybody thought it was the end of the story.

Debbie Jordan gave birth to a healthy child. However, the boy developed speech impairments at the age of three. He did not start talking like he was supposed to do at that stage of life. Instead, he began producing moans that resembled those of the mysterious caller. The boy was subjected to a number of tests, which showed no abnormalities whatsoever. Eventually, the boy’s speech impairments disappeared within nine months. Jordan believes her child’s speech impairments are somehow related to her “extraterrestrial” experience.

Betty Andreasson is the other woman who survived numerous abductions. Betty is a protagonist of Ray Fowler’s book Andreasson’s Case. She also experienced the intrusion of aliens intothe land line.

On December 19th, 1977, she was talking on the phone to Robert Luca, her new boyfriend, who was repeatedly snatched by aliens in the past. She would marry him later. All of a sudden, somebody cut in the conversation.

“There were voices in the receiver, and they sounded pretty disappointed at something. The only thing I could tell was: ‘This is the end! It’s all over!’, they were speaking some kind of a foreign language yet I got the message. The language resembled the buzz of a bumblebee. I told them to speak loader. Robert could hear them more distinctly then. I heard the sounds ‘click, click’, and the voices abated. Then I heard another bout of ‘click, click’, and the sound of their voices got back to normal,” says Betty Andreasson.

Robert Luca could not tell a word. Subsequently, Betty got interrupted a few more times by the phone line intruders as she spoke with Robert. One day Betty thought she had enough of that nuisance, and reported the case to ufologists. Robert followed suit. Later that day, an alien walked into Betty’s bedroom as the twilight was gathering. The ominous figure said that Betty was “heading for a tragedy.” Indeed, two days her children got killed in a car crash.

Four years ago, the Argentinean newspaper Diario La Arena reported the case of the 64-year-old Raul Dorado, a resident of the town of Jasinto Arauz . The above individual was admitted to hospital following an accident. It was not until a few days later that he could shed some light on the circumstances of his case.

According to Raul, on August 2nd, 2002 , he was walking across the field located five kilometers away from the town. Suddenly, he heard a loud sound nearby. He says he saw nothing. Then the sound came back. Finally, he looked up and saw a “green circle with three pillars” hanging right above him. Raul fell face down into the grass. His cell phone was plucked off his hand, and he could clearly see it being sucked into the object.

Raul spent another hour lying in the grass after the UFO went away. In the end, he managed to get up and walked up to his car. He was in total disarray when he got into town. He was apparently unable to speak. He could only communicate by gesturing or scribbling on the bits of paper, which he handed to the doctors when taken to hospital. The doctors found no injuries after examining Raul’s body in an emergency room. They could only see a tiny mark on the tip of his right-hand index finger. The aliens may have left the mark while taking way his cell phone.

One of the policemen called Dorado’s cell phone number several times. The policeman could hear someone breathing into the phone without saying anything. Then an answering machine would inform that “the number you dial is either unavailable or switched off.”

Scientists have been working hard for two hundred years to reach out for the stars by using giant radio telescopes and powerful antennas, which fry the birds that happen to be in the way. Some day those scientists will come to understand that they were doing the wrong thing as the phone starts ringing in their observatory. The most diehard skeptics will have to believe in “miracle” when they realize that aliens are capable of intruding into any kind of conventional communications on Earth. The question is: Will it be too late to come to grips with the