The press speculated with renewed enthusiasm about the prospects for space tourism following two events that took place last week. First, Daisuke Enomoto, a young Japanese entrepreneur who took a training course for the upcoming space mission on board the Russian Soyuz spaceship, was suddenly removed from the crewmember list. Then there was an announcement about the signing of an agreement for the construction of the first privately operated spaceport in Canada . There is already a long waiting list of those who dream about taking a ride on board the Soyuz spaceships to the International Space Station. Some experts believe private spaceports would start launching private tourist spaceships on a regular basis in some 5-6 years. Others are more pessimistic with regard to space tourism en masse. The debate continues as a scale of preparation for popular space tourism is growing by leaps and bounds. 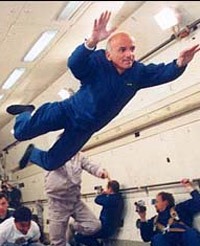 Perhaps medical requirements to space tourists will lessen when private spaceports will be put into operation. Presently the Russian doctors ensure that every member of a space screw comply with most rigid health requirements. The doctors are quite right in doing so. Flying to space will never be a cakewalk. In 1985, a mission commander on board the Soviet space station Soyuz-7 had to be urgently evacuated to Earth due to sudden aggravation of his chronic disease, which he had concealed. He had shown no signs of it during the flight preparation. But his condition worsened significantly after the disease became more acute in weightlessness. Given the above case, it seems fairly reasonable that the doctors crossed off the name of the 35-year-old Japanese on the crewmember list just about four weeks before the mission’s start.

From the very beginning, the doctors had their doubts about his state of health. The results of more in-depth examinations indicated that the Japanese space tourist was no good for a long-term flight. However, Daisuke could have qualified for a 10-day space trip provided that he had received treatment in order to correct his eyesight. The candidate did as he told. He successfully passed another examination in early 2006. His flight training began in March in the town of Zvezdny near Moscow .

Daisuke Enomoto is an interesting fellow. He was born in the city of Matsudo . He went to college but never graduated it. He spent some time with a computer software trading company. Then he set up a number of companies and sold them. Later he headed a stock-exchange company. The press alleged that his company had been involved in spreading of false information. He stepped down and became an independent investor. Then he moved for Hong Kong . Aside from the computer equipment and the Interment, he also goes in for swimming and comic strips featuring robots. He was going to assembly the plastic robot Gandam during his stay onboard the ISS… A few days before start of the mission, the latest medical examination showed some unfavorable changes in Daisuke’s health status. Those may have been caused by emotional strain. Anyway, the verdict is not final. Daisuke was recommended to take treatment. His dreams may come true if he manages to pass medical examination for the next flight. The most important thing is that the Japanese pays his bills in full.

Anousheh Ansari, an American woman of Iranian descent, is expected to replace the Japanese. Anousheh is 39 years old. She is an attractive, goal-oriented woman of tough character. Anousheh seems to completely comply with the image of a modern businesswoman. Back in 1993, she founded a company along with her husband Khamid and his brother Amir. The company dealt in the manufacture of telecommunications equipment. Their business blossomed. The operations expanded following a merger with another company. Anousheh’s assets are reportedly worth $200,000,000. Anousheh has been dreaming about a spaceflight since she was a child. In 2002, she filed an application for a suborbital spaceflight onboard a private spaceship.

But the construction of the private spaceship is yet to be completed. Eventually, the American businesswoman started her training in Zvezdny as a standby of the Japanese space tourist. Anousheh will be the first female space tourist and fourth non-professional crewmember to make a spaceflight onboard the Soyuz TMA-9 if she is approved by a special commission on August 30th.

The spaceship will have to be urgently modified once the businesswoman is put onto the crew list. First and foremost, the third seat in an orbiter cockpit will be modernized. A seat for each member of the crew is carefully molded to follow the exact contours of the body. There is a custom-made seat for Ansari too. It will be transported to the Baikonur spaceport and mounted on the Soyuz’s return capsule. Besides, some life support systems will have to be adjusted to certainpeculiarities ofa female body. Specialists say they have enough time to complete all necessary readjustments. In view of the above, the launch of the Soyuz, originally slated for September 14th, may be postponed till September 18th or 20th.

A preliminary Soyuz flight schedule for tourists and non-tourists is full up to the year 2008. Charles Simoni, one of the developers of Microsoft Word, an American of Hungarian descent, may take a flight to the ISS next spring. The first Malaysian astronaut is planned to arrive in the ISS in the fall of 2007. A South Korean citizen is slated to travel to the space station in spring of 2008. Venezuela expressed an intention to train an astronaut and put him to the ISS. The ambition may become a reality in the fall of 2008 or later on. Taking into account the effects of inflation, the cost of a short-term (a 10-day flight, as a rule) space flight has gone up from $20 million to $21.5 million. The number of professional astronauts and tourists on the waiting list is expected to decrease in 2-4 year’s time when additional Soyuz spaceships are built and a crew of six starts working on the ISS.

The market of space tourism may face a lot of competition in some 4 or 5 years. Foreign companies are planning to organize space tours using special space vehicles. A company that built private space shuttle Spaceshipvan, the one used by Michael Melville for flying at an altitude of 100 km i.e. space in June of 2004, was commissioned by the company founded by the British billionaire Richard Branson to build several suborbital space vehicles. The commercial spaceflights are slated to commence in 2011. The estimated cost of the project is 100,000 pounds. The passengers of a spaceship would spend a mere 5 minutes in weightlessness. However, a waiting list has the names of more than 150 candidates, including a heiress to Hilton hotel empire, businessmen, musicians, actors, an astrophysicist, a former mayor of one of the cities.

Another company is busy building a spaceplane. The sale of tickets ($150,000 a pop) has already begun. Those wishing to take a space ride include a Japanese writer, an American airline pilot, a designer, actors and businessmen.

The first private spaceport will be built soon in Canada , on the Island of Cape Breton. The government of Nova Scotia and a private company recently signed an agreement for the construction of the spaceport.

Another well-known U.S. company is intent on working on the market of mass space tourism. The company has already organized the space trips on Soyuz spaceships for two Americans and one South African. Anousheh Ansari also made her space travel arrangements via the same company. The company is currently holding talks with the Myasishev Machine-Building Plant in Russia on the construction of a number of suborbital space shuttle vehicles. A space shuttle will be mounted on the fuselage of M-55 Geofizika, a giant plane already in service, and brought to an altitude of 17,000 meters.

Then the space shuttle will activate its engines and reach an altitude of 101 kilometers. Upon accomplishing its mission, the vehicle will perform a controlled descent to Earth. It will unfold its wings, deploy its landing gear, and touch down on a runway.

“We’ve created good foundations for the future, we’ve got solid potential in terms of design and manufacture. So, once we’re commissioned to build vehicles of this type, we’ll be up to the job, no doubt about it,” said one of the managers of the above company, in an interview to Trud. Although the vehicle has not been yet developed, there have been more than 200 spaceflight applications filed to fate. The company intends to build two tourist airports to be used by the above vehicles – one should be built in the United Arab Emirates , and the other one in Singapore .

The European Space Agency apparently hates to be left behind. The ESA recently approved a program aimed at assisting private companies with the development of space tourism. Turkey is also planning to explore space. The Turks are going to build a spaceport and train astronauts by 2010. By all appearances, the era of mass space missions, including the tourist ones, is nigh. Experts estimate the number of space-crazed earth dwellers will exceed 10,000 by the year 2021. However, the pessimists are quick to throw cold water on those great expectations. They believe the space tourism boom will suffer a devastating blow should a major disaster take place. “The private companies have too little expertise, and they’re unlikely to pay as much attention as the Russian Aerospace Agency and NASA do to flight safety,” say the pessimists. I wish they would be wrong.