Next generation of flying micro-robots to be made of cellophane

Professor Jaehwan Kim and his colleagues at the Creative Research Center of Inha University in Korea have discovered that cellophane was a “smart material” which could be used for making flying robots provided that the material is exposed to an electric field. Russian scientists were quick to respond to the reports from Korea – they conducted a similar research into cellophane. 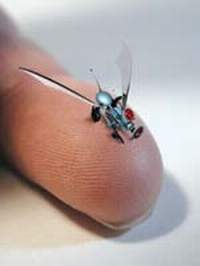 Next generation of flying micro-robots to be made of cellophane

“The discovery rests on specific piezoelectric properties of cellophane,” says Prof. Yuri Yevdokomov at V. A. Engelgardt Institute of Molecular Biology of the Russian Academy of Sciences. “Cellophane or ‘electroactive paper’ (EAPap) is coated with a thin film of gold on either side. Then the ‘plus’ electric voltage is applied on the one side of the EAPap, and the ‘minus’ voltage is applied on the other side. As a result, the material bends to the “positive” direction. It will symmetrically bend to the opposite direction if you switch the polarity. You can make it flap like a tiny wing if polarity is switched at a fairly quick pace. The amount of gold required for making the device is very small so the polyethylene miracle won’t cost like some article of jewelry,” adds Prof. Yevdokimov.

Scientists estimate that no batteries or wires are required for the device because the electric energy consumption is extremely low. A special microchip antenna can be integrated into EAPap. Electricity that moves it would be converted from the radio waves beamed to the antenna.

“The mechanism of such ultra-lightweight multifunctional applications is very resistant to the effects of environment, it can withstand well the chemical and mechanical impact,” says Prof. Yevdokimov. “Perhaps the above ‘birdlike style’ of movements will soon make full-blown competitors of these micro-insect robots in terms of miniature aircraft and other handy electro-mechanical applications for security monitoring. I’d say the devices could do a fine job for the traffic police,” adds he.

“As for the foreseeable future, we envisage the development of certain molecular structures capable of moving independently along the tissues of the human body in order to detect the presence and concentration of biological substances,” says Prof. Yevdokimov. “We believe the bioanalitic systems have quite excellent prospects for the use in the field of biochemical analysis and clinical diagnostics,” says he.

The Institute of Medical and Biological Studies of the Russian Academy of Sciences recently tested a similar molecular machine. The nanorobots comprised three components: the carrier molecules, the molecules to detect the cancer cells, and the luminescent solid molecules. The latter would point out the cancer cells once the compounds were inserted into the body to accumulate in the vicinity of a tumor. It is clear that the method can be used for delivering medicine to the right destination.

Researchers of the above institution are currently working on the development of a new material with extremely high cohesion, which will enable humans or robots to move about the slanting or vertical surfaces or even upside down.

“The research hinges on a natural phenomenon discovered about a year ago. The researchers found the reasons why the geckos – the small-sized tropical lizards which spent a considerable amount of time in space during several missions on board the International Space Station – were capable of easily clinging to steep surfaces,” says Professor Boris Pavlov, section chief of the Institute of Medical and Biological Studies, in an interview to Nezavisimaya Gazeta.

“The remarkable cohesion displayed by the lizards has nothing to do with special gluing matter excreted by their paws. The toes of a paw are covered with millions of microscopic hairs.

The hairs do the trick. Each hair is twice as big in an average human hair in thickness, and has about a thousand small pads on its end. Those pads are so small, so they can attach to the surface on the molecular level,” says Prof. Pavlov. A prototype can hold a weight of several kilos when clung to the ceiling. The researchers aim to develop a robotic climber for conducting research in open space.

Meanwhile, Japanese scientists built a unique robot capable of recognizing people by their facial features. The robot can also understand the meaning of about 10,000 words. It is designed mostly as a household assistant. The android is dubbed Wakamaru, it is one meter tall. The machine will be marketed as a mechanical nurse and home secretary. The designers claim the robot can look after the household while the occupants of a house are away at work or on vacation. The robot is reported to be able to warn the occupants of any illegal entry, look after the children or bedridden patients, perform secretarial duties without fail, and even use the e-mail.

The robot is a lightweight machine, it weights 30 kilos. Wakamaru is expected to retail at $14,300 a piece.