Information about a special new cream developed in the US able to protect from the effect of chemical and bacteriological weapons has given rise to many doubts and questions. This invention will certainly considerably improve soldiers’ protection at war and make it even more effective. 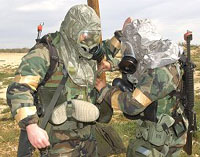 However, there is some risk that people may wish to apply the dangerous weapon in a different way.

Soon, the Neutralizing Skin Propellant cream developed by TIAX will be tested at the US Medical Research Institute of Chemical Defense. TIAX founder and Chief Executive Officer Kenan Sahin says that thanks to its fast action and the ability to undermine human health and cause irreversible damages war chemical agents pose a serious danger to soldiers.

Military men have protective clothes that unfortunately do not guarantee a 100 percent protection. ‘We are happy to have an opportunity to work on new technologies together with the US Army to make protection from war chemical agents better,’ the TIAX founder says.

TIAX spokespersons say that the new cream dissolves and neutralizes poisonous substances. The cream looks very much like foam; it is and safe for people’s health and not toxic. The protective effect lasts for about an hour. Cnews.ru reports that in case the new development proves effective at war, it may be also applied in other spheres.

Russia does not share the happy comments in connection with invention of the new cream in the US. Colonel of the reserve from the Central Intelligence Department Viktor Imaledinov told PRAVDA.Ru that the US had already made some attempts to invent a similar protection from chemical and bacteriological weapons earlier in 1986. But several research institutes related to the Pentagon were closed as it was believed that chemical and bacteriological weapons were so speedily developing that it was impossible to invent a counteraction. All projects working on the problem were stopped in 1989.

Major-General of the Soviet KGB reserve Alexander Bartenyev insists that such a cream cannot exist at all. He said that there may be no counteraction to the chemical and bacteriological weapons that several countries hold today. Indeed, if there was one, Vietnam or Iraq would not have made such concessions to the US. And the Iran leadership was forced to stop nuclear weapons projects. The expert adds that if such technologies actually existed, intelligence agents would have done their best to get these technologies to further reproduce them in Russia as it had happened with nuclear projects.