Noah's Ark made its final stop in Iran

High in the mountains of northwestern Iran, a Christian archaeology expedition has discovered a rock formation that its members say resembles the fabled Noah's ark. 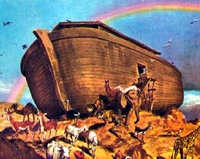 Noah's Ark made its final stop in Iran

The team discovered the prominent boat-shaped rocks at just over 13,000 feet (4,000 meters) on Mount Suleiman in Iran's Elburz mountain range.

"It looks uncannily like wood," said Robert Cornuke, president of the Bible Archaeology Search and Exploration Institute (BASE), the Palmer Lake, Colorado-based group that launched the expedition.

Photos taken by BASE members show a prow-shaped rock outcrop, which the team says resembles petrified wood, emerging from a ridge.

"We have had [cut] thin sections of the rock made, and we can see [wood] cell structures," Cornuke said.

Cornuke acknowledges that it may be hard to prove that this object was Noah's ark. But he says he is fairly convinced that the rock formation was an important place of pilgrimage in the past.

The BASE team has uncovered evidence of an ancient shrine near the outcrop, suggesting that this was an important place to people in the past, Cornuke says.

The story of Noah's ark is told in three major world religions: Christianity, Judaism, and Islam.

The Book of Genesis describes a great flood created by God "to destroy all life under the heavens."

But before the flood, God told Noah, one of his human followers, to build an ark and fill it with two of every species on the Earth.

Once Noah had done this, it rained for 40 days and 40 nights. After 7 months and 17 days the waters receded, according to Genesis, and the ark came to rest on the mountains of Ararat.

Most Bible scholars have interpreted this to refer to Mount Ararat in eastern Turkey.

But this location doesn't fit the description given in Genesis of the ark's passengers journeying from the east to arrive at Mesopotamia.

Cornuke and his team think that Mount Ararat might be a red herring.

"The Bible gives us a compass direction here, and it is not in the direction of Turkey. Instead it points directly towards Iran," Cornuke said.

Not everyone is convinced by the BASE team's claims.

Kevin Pickering, a geologist at University College London who specializes in sedimentary rocks, doesn't think that the ark-like rocks are petrified wood.

"The photos appear to show iron-stained sedimentary rocks, probably thin beds of silicified sandstones and shales, which were most likely laid down in a marine environment a long time ago," he said.

Pickering thinks that the BASE team may have mistaken the thin layers in the sediment for wood grain and the more prominent layers as beams of wood.

"The wider layers in the rock are what we call bedding planes," he said.

"They show fracture patterns that we associate with … the Earth processes that caused the rocks to be uplifted to their present height."

" Iran is famous for its small folds, many of which are the oil traps. Their oval, ark-like shape is classical," he said.

Bible scholars think that Noah built his ark somewhere between 6,000 and 10,000 years ago, making preservation highly unlikely except in extreme environmental conditions.

And even if the wood had petrified, there seems to be little evidence of Noah's carpentry, according to Robert Spicer, a geologist at England's Open University who specializes in the study of petrification, The National Geographic reports.

The BASE Institute's samples are being examined at labs in Texas and Florida. BASE officials concede that there would be no way to conclusively prove that their finding is actually Noah's Ark.

So the hunt goes on. The biggest hurdle in identifying Noah's Ark comes down to "gopher wood." The Bible says the Ark was made of gopher wood but no one knows what it is, ABC News says.