Amazed villagers from Bolotnikovo in Russia’s Nizhny Novgorod Region are sure they will again be swimming in the lake that disappeared in the spring of 2005 and is coming back now. 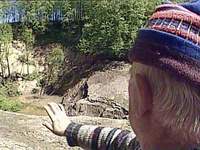 The Beloye Lake in the Vachsky District disappeared overnight last spring. The other day, people noticed that some water emerged at the place where the lake used to be earlier.

Villagers say that the cavity remaining after the lake vanished filled up with water early in spring. But the melt water was soon absorbed with the ground and the cavity once again got dry. People in the village gave up every hope to swim in the lake some day again. But the recent appearing of water made them believe that the lake would ‘come back’ soon.

There are some explanations to the lake’s disappearing. Researchers say that the lake vanished because of karst collapses. However, skeptics insist that karst collapses never occur in an instant as it happened with the lake in the Vachsky District. At first, the ground slowly sags which could be noticed with the unaided eye. And then the ground gradually collapses.

A tractor driver from the village suggested the most incredible explanation for the lake’s disappearing. He believes that those were extraterrestrials that stole water from the lake. Many of the villagers support the theory. They often observed some reddish light resembling a searchlight that originated from the area where the lake used to be.

Researchers studying the history of the region also say there is some mystery about vanishing of the lake. They add that the Beloye Lake first disappeared several centuries ago.

Head of the Culture Department in the Vachsky District Tatyana Bakina tells that mysterious phenomena from time to time occur near the village of Bolotnikovo. In 1600, there was a church standing on the place where later the Beloye Lake appeared. One day the church disappeared under the surface. The incident made superstitious people believe that disappearing of the church was God’s anger. In a couple of decades, a big wonderful lake suddenly appeared on the place where the church used to be situated. Nobody knew the story; researchers came across it in the archives after the lake disappeared last time.

Now, villagers can find water in two areas: immediately in the crater and a little away from it. The administration of Vachsk thinks that the mystical place of note may attract tourists from different parts of the country.

At that, experts say it is first of all important to investigate the karst as it may be dangerous to walk there. Unfortunately, local researchers do not have enough money to have the investigation.

Senior research fellow with JSC Anti-karst and Coastal Guard Vladimir Tolmachev says that return of the lake is a natural phenomenon. He compares a karst crater with a huge bath. “When we want to pour water out of the bath we take out a stopper and the water goes out. As for the lake, the water easily flew away as some hollow appeared in the karst layers. Now, a huge stopper is forming of sand and clay there. So, it is highly likely that the lake will come back.” The expert adds that there is another karst lake in a neighboring district of the region.