Student from Siberia makes sensational discovery in the field of oncology

The rector of Moscow State University (MSU), Victor Sadovnichy, has supported the recent initiative of genetic scientists in Moscow, agreeing to transfer Vasilii Mansky, a Siberian student, to MSU. On presenting his paper on evolutionary oncology in Moscow, this student from the faculty of medicine at Siberian State University created a genuine sensation in scientific circles. Eminent scholars believe that Mansky’s discovery will lead to a breakthrough in cures for oncological diseases. Yesterday, according to the newspaper Vremya Novostei, the rector of Siberian State University said goodbye to Mansky in the presence of all the students and wished him success in the capital. 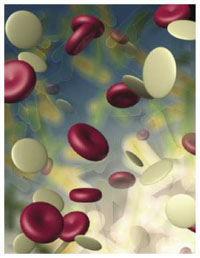 Student from Siberia makes sensational discovery in the field of oncology

During his third year at university, Vasily Mansky wrote a serious scientific monograph entitled “An Essay on Evolutionary Oncology”. As a rule, theoretical papers at this level are usually the work of well-established scientists, Candidates or Doctors in scientific fields, with an impressive service record and dozens of publications in scientific journals behind them. This, however, is the case of a mere student from a working-class background.

Vasily Mansky’s monograph, proposing an original attempt to analyze oncological problems from both an evolutionary and a general biological perspective, was recently published under the authority of the Head of the Department of Pathological Anatomy, Professor Vladimir Perelmuter. Mansky bases his work on his theory “on the general biological role of tumorous growths as one of the components of the hierarchical system of genetic homeostasis of the population”. This is a theoretical work on the boundary between biology and medicine, a theory of evolutionary oncology.

As explained in the monograph, both in humans and animals, there are systems that eliminate mutated, potentially malignant cells, including cancerous ones. On the lowest level, there is a “program”, which activates the ability of cells to “repair” or block a DNA defect. On the next level, there is the suicide of the cell itself, which occurs when it has accumulated many mutations, or the destruction of a malignant cell by the immune system. The highest level is the destruction of the entire organism, i.e. a cancerous tumor.

The essence of Mansky’s hypothesis lies in the fact that a “switching mechanism” exists in every organism, which determines on which level the elimination of genetic defects will occur. It is essential to find an explanation as to how this “switching” takes place in order to learn to control irreversible processes. If doctors are able to “switch” the mechanism controlling the elimination of DNA defects from one level to another and even reverse the suicide mechanism, this will constitute a genuine breakthrough in cures for those suffering from oncological diseases, of which there are approximately 2.5 million cases officially diagnosed in Russia, the publication affirms.

Vasily Mansky describes how he came to be in Moscow. “An article by Professor L. from the Russian Oncological Scientific Centre, entitled “Cancer as the programmed destruction of the organism”, appeared in a reputable scientific journal. In it was a hypothesis that was in many ways similar to the second chapter of my monograph. The article was published after my monograph and did not make reference to me”, - pointed out Vasily Mansky.

The young scholar wrote a letter to the editors of the journal. Without doubting that “the situation provided evidence of a parallel development in this scientific idea”, the student asked to draw attention to the fact that the hypothesis had been developed in detail and published by himself before the appearance of the article. Shortly afterwards, Vasily Mansky received a reply from a representative of the journal, the director of the Institute of Physical and Chemical Biology, in the name of Belozersky MSU, an academic at the Russian Academy of Sciences, Vladimir Skulachev. The scientist agreed to meet all the conditions stipulated by the young geneticist and intrigued by the contents of the monograph, invited Mansky to explain his theory at a seminar in Moscow.

There, he was noticed by leading Russian molecular biologists. Immediately after the seminar, Vasily Mansky received an offer to transfer to MSU. This initiative has already been approved by Victor Sadovnichy, the rector of MSU.