Mobile phones have become an inseparable part of our everyday life. People speak over mobile phones everywhere. However scientists came to the conclusion that if you're chatting on a cell phone during a lightning storm, dropped calls could be the least of your worries. 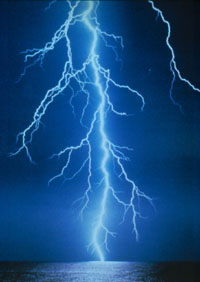 According to a letter published in this week's issue of the British Medical Journal, people who talk on, or even just carry, mobile phones outdoors during storms are more likely to sustain fatal internal injuries if struck by lightning.

Human skin is resistant to transmitting electricity into the body, so when lightning strikes a person, it tends to travel along the skin. Scientists call this phenomenon "flashover." According to the doctors, conductive materials such as liquids or metallic objects can interrupt flashover and direct lightning into the body, causing internal damage.

"This can result in injuries like cardiac arrest, which is often fatal," said Swinda Espirit, a doctor at Northwick Park Hospital in England who co-authored the letter.

The doctors describe the case of a 15-year-old girl who was struck by lightning while using a cell phone in London. The girl survived, but still suffered physical, cognitive and emotional problems one year later.

The doctors also cite three anecdotal newspaper reports of people being struck by lightning while talking on cell phones.

"This rare phenomenon is a public health issue, and education is necessary to highlight the risk of using mobile phones outdoors during stormy weather…" the doctors write. The letter in the journal, however, is not backed by the sort of scientific rigor that goes into many published papers.

Vladimir Rakov, a lightning expert at the University of Florida, chuckled when he heard about the letter. He says the mechanism outlined by the doctors sounds unrealistic.

"I don’t think having a cell phone in your pocket can change the outcome of a lightning strike," Rakov told LiveScience.

Better advice, Rakov said, would be: "Don't remain outdoors during a thunderstorm, whether you carry a cell phone or not."

The risk of lighting lasts longer than many people realize. Experts advise staying indoors for 30 minutes after a thunderstorm appears to have passed. Lightning often strikes as far as 10 miles away from any rainfall, scientists say. It can travel sideways and strike under blue skies.

Thunderstorms are caused by rapidly rising and falling currents of air. The friction from this moving air creates electrical charges within a cloud. Water droplets and ice pellets fall, carrying charged electrons to the lower portion of the cloud, where a negative charge builds. A positive charge builds up near the top of a cloud.

Most of the electrical energy in a thunderstorm is dissipated within the clouds, as lightning hops between the positively and negatively charged areas. Lightning becomes dangerous, though, when it reaches for the Earth.

When the negative charge in the cloud becomes great enough, it seeks an easy path to the positively charged ground below. The current looks for a good conductor of electricity, or a tall structure anchored to the ground (such as a tree or a tall building). The negative charge sends out a feeler, called a stepped leader, which is a series of invisible steps of negative charges.

As the stepped leader nears the ground, a positive streamer reaches up for it. Only then, once this channel is made, does the visible lightning happen. A return stroke runs from the ground to the clouds in a spectacular flash.

Though the bolt appears continuous, it is actually a series of short bursts. Most lightning strikes occur in less than a half second and the bolt is usually less than 2 inches in diameter.

The air around a lightning bolt is superheated to about 54,000 degrees Fahrenheit (five times hotter than the sun!). This sudden heating causes the air to expand faster than the speed of sound, which compresses the air and forms a shock wave; we hear it as thunder. Since the bolt is actually several short bursts strung together, multiple shock waves are created at different altitudes; this is why thunder seems to rumble - each shock wave takes a different amount of time to reach your ear.

- The total energy in a large thunderstorm is more than that in an atomic bomb.

- About a hundred U.S. residents are killed by lightning every year.

- The Empire State Building in New York City is struck by lightning about 25 times every year.

19:35
German Leopard 2A4 heavy tanks spotted in Ukraine
18:42
Russian large landing ships disappear from naval base in Novorossiysk
18:00
Chechnya thanks the West for the weapons supplied to Ukraine
17:46
Ukraine can skip Membership Action Plan on its way to NATO
17:34
Azovstal militants reveal how many days they can hold out
16:47
Russia and Ukraine reach agreement to evacuate wounded from Azovstal
16:12
Expert says why Kyiv was interested in nuclear weapon before Russian operation started
15:33
Putin at CSTO summit: Russia does not have any issues with Sweden or Finland
14:47
Renault Russia to start producing Moskvich cars
17:39
Belgrade says four countries ready to withdraw recognition of Kosovo
Hotspots and Incidents
Ten Ukrainian military leave Azovstal, declare readiness to negotiate