The satellite will carry a space observatory for watching extragalactic bodies

Russian Federal Aerospace Agency said yesterday that a satellite with a astrophysical laboratory Radioastron would be launched into space in the near future. The satellite will carry a space observatory for watching extragalactic bodies. According to a statement released Roskosmos, the project Radiostron is designed to carry out systematic research of “unusual heavenly bodies e.g. super-massive black holes in the nuclei of distant and nearby galaxies, neutron stars, and a gravitational field of Earth.” 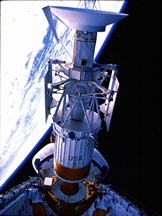 In addition, scientists also hope to discover new super powerful sources of energy by using the telescope. Nikolai Kardashev, a co-author of the project, said that the telescope would be part of a network of telescopes deployed in space. “Eventually, a huge network of space observatories will enable us to watch the black holes and nearby galaxies with great resolution exceeding that of a human eye by 20 million times,” said Mr. Kardashev. He also said that the project was in fact a combined effort of a few countries.

Russia is responsible for implementation of a larger part of the project. The astrophysical laboratory has extra-sensitive equipment tested by an observatory of the Lebedev Institute of Physics in Pushin. According to Mr. Kardashev, the launch of a satellite with the radio telescope is slated for 2007. Hopefully, the launch will be carried out as planned. There was a series of delays in the past due to lack of financing. At last, the government allocated funds for the project. Chief of the department of scientific space complexes Nikolay Sanko estimates that more than 1.5 billion rubles are needed to successfully complete the project i.e. deploy Radioastron into orbit. “The money is being allocated to us step by step,” says Mr. Sanko. The state funding of the project  is an encouraging sign, according to Mr. Sanko. He believes the government has finally started dealing with problems relating to a revival of fundamental space research in Russia.