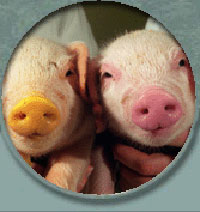 The transmission of both known and unknown diseases to a human being is quite possible during the transplantation of animal cells or tissues.

Russian scientists continue the research in the field of transposing proteins of human origin into animals' DNA. It is worth mentioning that DNA is organic acid, which makes an injection of protein a rather problematic goal to pursue. It goes about the gene, which controls the synthesis of lactoferrin protein.

Japanese scientists, for example, will probably use human genes for growing rice. The human gene will provide the synthesis of one of the hepatic enzymes, responsible for neutralization of toxins. Japanese researchers are trying to protect their traditional agricultural crop against the influence of a variety of chemicals.

Local proponents of genetically pure animals and plants set out their protests immediately and said that eating rice containing human genes could be compared to cannibalism. Experts also expressed their concerns about the danger of genetically modified food. Nevertheless, modern science continues its progress in the direction.

The expert council of the World Health Organization warns against possible dangerous consequences, which might appear from the development of xenotransplantation, when living cells, tissues and organs of the animalistic origin are transplanted to humans. WTO specialists acknowledged the success of transplanting such material from genetically modified pigs to baboons. They stressed out the obvious thing, however: a human being is not a baboon. Needless to say that the creation of pigs, the tissue and cells of which can fit a human, can undoubtedly be considered a revolutionary breakthrough in transplantology. Brushing ethical aspects aside, such an achievement can solve a lot of problems connected with transplantation of organs. It is especially important for Russia: Russian law-enforcement bodies have a rather biased attitude to transplantology.

The transmission of both known and unknown diseases to a human being is likely to occur during the transplantation of animal cells or tissues. Such incidents have already been registered in medical practice, even during human-to-human transplantations. Three recipients of donor organs were infected with rabies in Germany, for example.

The danger becomes even more serious on account of the fact that an infection can endanger the whole humanity once it finds itself in the body of only one person. This question is especially important against the background of quality control over the donor material in certain countries. Even the best control does not guarantee the absolute protection against a new type of SARS virus, for instance, or H5N1 flu virus, which used to be a bird disease only. Scientists say that we are currently witnessing the migration of diseases across species. Pigs, dogs and human beings practically suffer from similar diseases.

Members of the World Health Organization passed a resolution on xenotransplantation in 2004. According to the document, xenotransplantation can be allowed in every particular state upon the establishment of highly efficient national control and observation mechanisms accountable to national healthcare authorities. Furthermore, specialists persistently recommend to set up international supervising organizations, in order to trace and suppress attempts of illegal use of such technologies. It is not hard for a specialist to make a virus of anthrax with the help of genetic material, for instance.