The Russian volley-fire rocket system known as Smerch (Tornado) has no analogues in the world. The Smerch machine is usually made of six launchers and six transloaders (each transloader contains 12 rockets and has a crane to move them to the launcher). The unit is capable of delivering mines for the anti-tank and antipersonnel mining of a territory, destroying armored vehicles, fortified constructions and command posts. 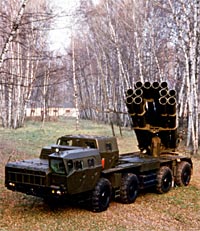 One volley fire of 12 free 300 mm missiles covers the square of 650x650 meters. The commander of Russian missile troops, Vladimir Zaritsky, said that specialists were going to modernize the rocket system in order to increase its battling capacity by 20 percent.

Increasing the power of the unit is not the most important goal that engineers will be pursuing in their work. Considerable deviations in the trajectory of missiles have always been the weak point of all volley-fire systems, beginning from the era of the legendary Katyusha missile launcher.  The drawback became the biggest disadvantage in the work of the US-made MLRS. The system could fire its missiles at the distance of only 30-40 kilometers. A further increase of the launching power would result in a considerable dispersion of missiles, which is detrimental to the battling efficiency.

Specialists of the Tula-based scientific and industrial enterprise Splav were apparently unaware of the circumstance, when they put forward the latest model of the Smerch unit to the arsenal of the Soviet Union Army in 1987. The range of its missiles outdistanced American achievements twice, whereas the target destruction precision (the dispersion of missiles) remained the same – 0.21 percent of the salvo range (about 150 meters).

Kuwait and United Arab Emirates paid attention to the battling capacity of the Smerch missile system in 1991, after the US-led operation against Iraq. The Arab authorities decided to acquire super-powerful weapons to secure themselves against a possible attack from Iraq.

The Russian defense industry presented a new version of the volley-fire system at a recent exhibition of arms and defense technologies, IDEX-2005, in Abu-Dhabi. The show presented the new model of the Smerch unit, outfitted with the target designation system.

“All volley-fire rocket and artillery systems have the reconnaissance problem. We found a very good solution to it. One may say that we inserted a spy plane in system's rockets. Unlike other types of aircraft, it is hard to down such a plane, because it is transferred to a battling area inside a rocket, comes through air defense systems very fast and provides the fire correction within about 20 minutes,” the chief engineer of the Splav industrial association, Nikolai Makarovets said.

It takes the Smerch unit only 38 seconds to volley-fire 12 rockets. Smerch has already proved its impressive destructive capacity during the anti-terrorist operation in the Northern Caucasus.

Russian engineers plan to amend the multiple launch rocket system further as well and outfit the Smerch machine with homing missiles. Such an addition will make the unit become the up-to-date high-precision weapon.