A teaspoonful of neutron substance weighs as much as all cars on planet Earth – billions of tons!

It is generally believed that the Universe appeared as a result of the great vacuum explosion. One may therefore presume that there was a time, when the Universe did not exist. A lot of scientists from all over the world have a great interest in the question: what the matter was like before the great explosion, what form of life could exist at that time and which IQ level pre-explosion creatures could probably have? 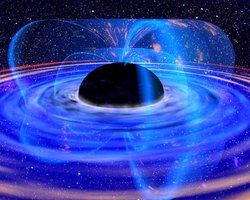 Russian academician Valeri Rubakov and US professor Juan Maldacena of Princeton University have recently delivered reports on physics at the Institute of Physics of the Russian Academy of Sciences. Maldacena's lecture was devoted to black holes, whereas the Russian scientist reported about the black matter and the black energy of the Universe. The two reports were presumably devoted to the structure and organization of spacetime in cosmological scale. It was particularly said, for example, that Universe is a constantly extending matter: distances double in Universe every 12 billion years, although it is an extremely slow process from the cosmological point of view.

Turning a celestial body into a black hole is possible: an object, the mass of which is comparable to the mass of the Earth can be turned into a black hole, if it is squeezed to the size of only one centimeter in radius. If a space object is as heavy as the Sun, it should be reduced in size to one kilometer in diameter in order to become a black hole.

It is worth mentioning that human beings can perceive time differently, depending on speed, at which they move. It has been tentatively proved that gravitation has a certain influence on the speed of time too. Einstein proposed that mass warps spacetime around itself, which leads to unusual results at times. A person living on the first storey of an apartment block, for example, usually has a slower perception of time in comparison with another person living on the top storey of the same building.

The time on the surface of the Sun is one-millionth slower than the time, which is measured far from the heavenly star. Time elapses at the speed of 70 percent on the surface of a neutron star in comparison with the speed of time far away from the star. The density of a neutron star may exceed 10 million tons in a cubic centimeter, while a star can be only one kilometer in diameter. A teaspoonful of neutron substance weighs as much as all cars on planet Earth – billions of tons!

According to Einstein's theory of General Relativity, time becomes slower when approaching a massive star in space. If a star becomes smaller than a black hole, time stops on such an object. Physicists refer to such heavenly bodies as cold stars.

The typical diameter of a black hole is ten kilometers. However, there is a giant black hole somewhere in the Universe, the diameter of which is comparable to the size of the Solar system. Astronomers have recently registered a colossal current of particles that were flowing from the galaxy situated about 90 thousand light years far from Earth. Specialists believe that it is a black hole that produces such a flow of particles. In general, every Milky Way-resembling galaxy has a black hole of its own, in the center.

Modern scientists have not been able to model the exhalation of a black hole yet. Researchers believe that black holes absorb information utterly and irretrievably. Therefore, if a book falls into a black hole, the information will disappear in the hole for good. Such an assumption, however, contradicts to quantum mechanics principles. Another theory was needed to evade the paradox. Professor Maldacena said that the string theory could assist in accomplishing the goal. The string theory combines quantum mechanics and Einstein's gravitation theory, which is a necessary aspect to understand the problem of the great explosion. The string theory apparently makes the only possibility to give an adequate description for the origin of the Universe. The title of the theory appeared from scientists' supposition that gravitons, the carriers of gravitational interaction, bear some resemblance to string-made loops.

The theory has not been tentatively proved. Professor Maldacena acknowledged that modern science is unable to describe the great explosion with the help of the string theory. However, the theory can unite all existing interactions.