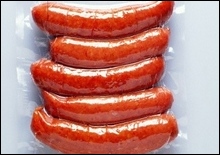 But horseradish can bring salvation.
Scientists are now firmly convinced that sausages, frankfurters and other fried and smoked meat products can cause cancer. Carcinogens produced during the processing of that savory and valuable food can cause cancer of the pancreas.

Doctors have long said that sausage was detrimental to health. According to a study conducted in 2002 at the National Cancer Institute of the Tufts University in Boston, patients with a meat-based are running a 3-time greater risk of developing certain kinds of cancer as opposed to patients who stick to vegetables and milk. Meat-eaters are likely to develop cancer in the pancreas, large intestine, or esophagus. The combination of meat and milk products can greatly increase the risks of cancer.

Now that all the findings have been checked and put in order, scientists are confident that the consumption of frankfurters can lead to the development of cancer. 190 thousand people took part in the survey. The results show that the risk of pancreatic cancer went up 67%  in those who overate on frankfurters. You do no have to eat too much smoked sausage to develop a malignancy. Those who like eating pork and red meat are 50% more susceptible to the risks of cancer. Scientists say that a diet of chicken, fish, milk products and eggs can do you no harm.

Well, if you feel an irresistible urge to have a slice of pork, you had better put a thick layer of horseradish all over the meat. English scientists found out that horseradish was capable of destroying cancer cells. Scientists discovered the new properties of horseradish by chance while conducting a research on exotic extracts used by the peoples of Africa.