The spacecraft represents eight petals, the square of which totals 600 meters

The launch of the Solar Sail spacecraft, which will be traveling in space only with the help of the so-called solar wind, has been delayed till late April of the current year. The previous experimental launch in July of 2001 ended up with a failure: the craft did not separate itself from the carrier rocket and burnt as it entered dense layers of the Earth's atmosphere. 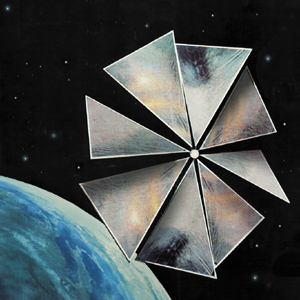 Lidiya Avdeyeva from Russia's Lavochkin Scientific Production Center said that the launch had been delayed on account of a large volume of pre-launch tests. “We are currently checking all systems of the Cosmos-1 spacecraft, on the base of which the Solar Sail was created,” Avdeyeva told the Nezavisimaya Gazeta.

Lidia Avdeyeva specified that such a poetic title for the project has not been chosen incidentally. The spacecraft represents eight petals, the square of which totals 600 meters: the probe bears some resemblance to ship sails. The joint project of Russia and the USA also involves the Space Research Institute of the Russian Academy of Sciences, the US Planetary Society and several other organizations.

”The 100-kilo spacecraft, will be launched into orbit from a Russian nuclear submarine in the Barents Sea. When it achieves the altitude of 800 kilometers above the Earth's surface, the spacecraft will put up the 15-meter solar sail, which is made of reflecting polymer film,” Lidia Avdeyeva said.

As the electromagnetic and corpuscular solar radiation falls on the mirror surface, it is supposed to create the pressure, which will set the spacecraft in motion. Scientists believe that the pressure will originally be extremely weak: Solar Sail will start the space voyage at the speed of only one millimeter a second. A hundred days later, however, the probe will reach the speed of about 160,000 kilometers per hour.

Scientists believe that the development has become a breakthrough in modern space exploration, which opens new horizons of energetic opportunities for mankind. A traditional spacecraft is capable of reaching Pluto's orbit in nine years only. If a spaceship uses the solar wind, it will be possible to halve this time.

The Solar Sail project will become the prototype of intergalactic spaceships of the future, which will be able to cover huge distances very fast and without any consumption any fuel.