Insects represent an inexhaustible source for pharmaceutical substances of the future

Russian scientists are currently working on new antivirus and anticancer drugs based on immune system of insects. Researchers take new medical ideas from a variety of living beings, including insects. Scientists from the Biological Research Institute in St.Petersburg (chaired by Sergei Chernysh) are developing new medications on the base of the substance, which they extract from the immune system of insects. 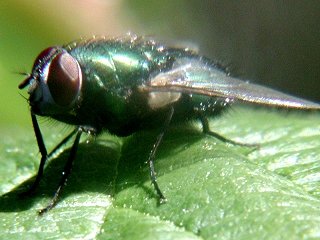 Modern scientists have a special interest in insects. Insects came out of the sea and evolved into surface species about 400 million years ago. These creatures have achieved astounding progress as they were becoming the largest group of living beings on land. The immune system of insects differs a lot from the one of humans, although the difference does not make it less effective. For example, insects are capable of distinguishing microbe cells with the help of receptor molecules and synthesize protective peptides in response. Insects, therefore, represent an inexhaustible source for pharmaceutical substances of the future.

A group of St.Petersburg scientists have already created the new medical product – an analogue to peptide generated in the immune system of insects. The scientists received the active substance of the new medication (alloferon) from larvae of Calliphoridae fly – medics have been using this insect for hundreds of years to save wounded people. The new medication has been successfully tested as the anti-tumor drug, which is presumably used for treating herpes – one of the most widespread, albeit incurable infections, which causes trouble to 15 percent of the planet's population.

Russian scientists are working in two directions within the framework of the “insect project.” They are developing a new generation of medical drugs on the base of alloferon peptides – allostatines. These are relatively short protein molecules, the chain of which reaches 10-15 amino acids. Allostatines resist viruses and reduce the reproduction speed (proliferation) of cancer cells.

Scientists are not going to receive allostatines and alloferons directly from insects: it is much easier to synthesize the substances. The synthesized compounds will be used to treat virus infections and for cancer tumors therapy. St.Petersburg biologists believe that the mechanism of the new medicine is most likely connected with identification of abnormal cells – virus-infected or cancer cells. “The main goal of the research is to intensify the antivirus protection of a living organism, which will help in preventing the progress of a disease. Patients with herpes and papilloma viruses comprise the risk group at this point. We are determined to work with these groups of patients, first and foremost,” Sergei Chernysh said.

The second part of the project is connected with the development of brand new medicines on the base of insect immune system - so-called enthovirons. This is a group of biologically active substances, which has never been studied before. In addition, enthovirons do not have any analogues among other known substances. Russian scientists are certain that the search for new potential antivirus medicines will probably result in an absolutely new field of bio-pharmaceutics.