Sunday April 17, the 11th expedition arrived on the International Space Station, and the previous crew met them with sweets. It took two days for Soyuz with Commander Sergey Krikalev, NASA ISS Science Officer John Phillips and European Space Agency Astronaut Roberto Vittori on board to reach the space station after it started from the Baikonur spaceport. 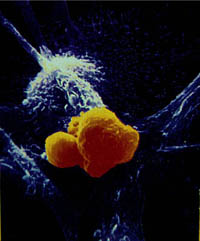 At 6 a.m. Moscow time, Soyuz started approaching the Russian segment of the International Space Station, and docked it in several minutes. The crew performed the hand off docking half an hour quicker, although this is usually a laborious procedure. John Phillips was the first to get to the international space station at 8:46 a.m., he gave presents and messages from Earth to Salijan Sharipov of the previous crew. The imponderability is still something unusual for the new crew.

The Mission Control on Earth was  watching the docking closely. The new crew will conduct a great number of scientific experiments; in particular they will work on AIDS vaccine development. Besides, the astronauts will get to the outer space twice and receive two American shuttles. NASA spokespersons confirmed on Sunday that shuttles would resume flights in May.

NASA Deputy Administrator Fred Gregory says that NASA hope shuttles will recommence flights from May 15 to June 3 as it is scheduled. The start is possible only if NASA experts state flights are safe. There is still enough time to get ready for successful launching of the shuttles, NASA states.

The new crew of the international space station also needs to take pictures of Discovery when it approaches the station to make sure its shell is intact. Captain of the 11th expedition Sergey Krikalev reported the goal earlier before the start.

In spite of Gregory's optimistic statements, the shuttles will be able to start to the international space station not earlier than May 22. The new crew now has to get acquainted with the space station; the tenth expedition shows ways for evacuation in case of emergency and the way to the life-boat.

In eight days, Leroy Chiao and Salijan Sharipov will get back to Earth together with Roberto Vittori. Krikalev and Phillips will stay on the orbit for half a year.