The first cryonic storage facility has been recently opened in the village of Alabychevo, near the town of Solnechnogorsk, some 50 km northwest of Moscow. The facility is expected to store frozen brains of those who wished to be immortal. 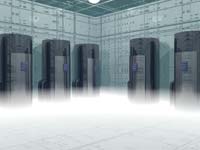 Staff at a museum of regional studies in Solnechnogorsk found it difficult to give an answer to the question put by Komsomolskaya Pravda correspondents: Does the museum have any records relating to the activity of sorcerers or necromancers in the old village Alabyshevo? We asked around locals but they could not unearth any legends or tall tales about “witches poisoning cattle and putting the evil eye on the people.” Looks like locals have no traditions of fighting evil powers. Anyway, spokespersons at the company KrioRus are reluctant to advise the local residents about the plans of the company. The company leased an old school building in Alabyshevo this April. The building has no signboard above the front door. There is a barbwire fence enclosing the building. Speaking of the fence, the lessee seemed to do the right thing because some people might really think that KrioRus is involved in black magic operations.

In the next fifty years, the company will store dead bodies and heads of those who wished to live forever.

Equipment for the production of liquid nitrogen - the Dewar flask - was delivered to Alybashevo late April. Equipment looks like a kind of Thermos for nitrogen, capable of holding 250 liters of nitrogen. Several portable heat-insulating containers were also brought in. After all pieces of equipment were put in place, two human brains were immersed in the Dewar flask filled with liquid nitrogen. The brains will be stored at an extremely low temperature of 196 degrees Celsius until new technologies enable scientists to implant them into the head of some computerized human being or an ordinary human donor. Thus a new host will inherit knowledge and habits of a former host. Two Russian nationals have already opted for the above method of reaching immortality. The owners of KrioRus are confident that more customers will shortly make arrangements with the company.

“The names of ten customers are already sitting on our waiting list,” says Danila Medvedev, director general of KrioRus. He apparently enjoys talking about the number of customers. “We are ready to take a customer’s brain for storing during an indefinite amount of time. Should a customer wish to preserve his body in its entirety, we will deep-freeze it and ship it to the Institute of Cryonics, which is in the United States ,” adds Medvedev.

At the moment the specialists at KrioRus storage in Alabyshevo are dealing with two customers.

Information about the first customer is pretty scarce. He was a man, aged 60 or 70. He died of prostate cancer. His son, a businessman, decided to freeze the father’s brain. The son reportedly holds dual citizenship (Russian and Swiss), he dreams of preserving his body too so that his father and he may revive together.

The other customer is a woman, called Lydia Fedorenko, a math teacher from St. Petersburg . She was 79 years old at the time of death .Her grandson, DaniilFedorenko, a researcher at the Institute of Exact Mechanics and Optics, decided to preserve her brain for further revival.

“Did you grandmother give you permission to freeze her?”

“My grandmother and I had talked a lot on the subject. Finally, she consented to the plan. It’s all in her will.”

“How did the other loved ones react to her decision?”

“Not the whole lot were aware of her decision. Some of them reacted pretty badly after I told them. I somehow managed to calm them down in the end. Things are okay now.”

“Let’s assume that scientists will be capable of thawing the bodies one of these days. What body would you choose for putting your grandmother’s brain to?

“She will decide by herself. I’m sure that in a few decades humans will be able to choose whatever bodies they want to use. It might as well be a cybernetic body.

“Just like the one that Schwarzenegger had in Terminator?

“It’s possible. There’s yet the second option if scientists learn how to grow new artificial organs.”

For seven months Daniil had kept his grandmother’s brain at home, in a special heat-insulating container. Now the container sits in the Alabyshevo storage facility,

“You see, a human being will have a chance to make his own most important decision: live or die. I loved my grandmother very much. I want her to be near me again so that we’ll never go apart from each other.”

The brain of the math teacher is now kept at the bottom of a tank filled with liquid nitrogen. Once a heavy lid is removed, you can see the shape of a metal container hanging in nitrogen vapor.

The caring grandson will have to cough up $500 a year for storing his grandmother’s brain in Alabyshevo. It is a temporary fee that will be canceled after the company starts drawing more customers, according to Danila Medvedev. He says KrioRus will store the brain of Lydia Fedorenko at no charge since she is the company’s first customer.

“I believe new technologies will be available after 2030,” says Medvedev. “Using those new technologies, scientists will be able to bring back to life entire humans or their brain only. A reviving technique will be widely affordable by 2050. Now I wouldn’t like to guess how much it will cost in the future. But I do believe that Lydia Fedorenko will be one of the first customers to be revived, and her relatives will pay nothing for her revival. As far as I know, the lady is the oldest person kept in a cryonic storage at the moment,” says Medvedev.

Fedorenko will soon become the oldest person of the planet Earth. Her revival will be a good PR move.

- Preparatory work and freezing of a whole body, including transportation to the Institute of Cryonics ( United States ): $45,000

- Freezing and storing of small-sized pets: charges to be agreed.