Institute of Psychology of the Russian Academy of Sciences has recently polled Russian scientists. The respondents were offered to answer two questions regarding plagiarism. The questions were: “Does the problem of plagiarism concern you?” and “Did your ideas ever get stolen?” 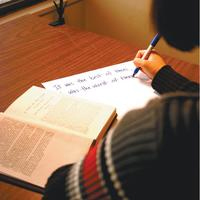 The poll results show that the above problem concerns 26% of the respondents while it is of no concern to 61% of them. 13% of the respondents failed to give any answer. The results indicate that 34% of the respondents believe their ideas were stolen, 40% say it never happened to them, and 21% believe the question is far too complex, therefore, a straight answer will not do. 5% provide other answers ranging from “ideas can not be private property because they travel around the globe” to “there are implicit forms of plagiarism.” Some respondents believe that “there is a very fine line between legal and illegal use of ideas” and “we let the cat out of the bag ourselves so it is only natural that somebody puts our ideas to good use.” Others even would not mind their ideas being plagiarized and developed into something worthwhile.

On the face of it, the results of the poll look a little strange for the scientific community is thought to be overly concerned about the problem of plagiarism. Besides, we should take into account a few important factors that could help us see the picture more clearly. Those factors include the current difficult phase Russian science is going through primarily due to its “external problems” e.g. lack of work and funds, distortion of a normal system of relationship between science and society as the “internal problems” of the scientific community fall into the background. Notwithstanding the above difficulties, one forth of the community is concerned about plagiarism so the problem should not be regarded as a bit of nuisance.

Meanwhile, the poll results show that some members of the scientific community have quite unorthodox attitude towards the problem of plagiarism. In some cases the stealing of another's concept is regarded as an act of recognition of the concept and a compliment of sorts to its author which in any case is a lot better than a total lack of attention. The theory of the so-called “norm of communism” is quite popular with many Russian scientists. The theory was put forth by Robert Merton, a noted historian of science and sociologist. According to the theory, scientific ideas belong to the whole scientific community, they can not be patented by a particular author. Russian scientists have not yet learned to view ideas as “commercial goods”, a typical attitude to intellectual property within the Western scientific community.

Russian scientists are also unhappy about the change of stealing practices e.g. individual ideas were commonly stolen in the past as opposed to today's disappearance of entire texts. A few brand-new ways of stealing are in use these days. For example, a “thief” can make reference to the source at the beginning and then he or she goes on to copy a few pages from it without making any references at all. That reference at the start makes the “thief” invulnerable in terms of legal action.