New video technology allows to keep 10 films on one DVD

No sooner have Russians had time to replace their video players with DVD players than the time has come again to keep up with modern times! Not long ago in America began the sale of DVD disks, which can now hold as many as ten films on one single disk. It seems, that again, we will have to adjust to the endless succession of commodities flung at us from the other side of the Atlantic. These newest accessories to come our way are called HD-DVD and Blu-ray. Moreover these two competing formats are now fighting for first place while regular users risk becoming hostages in this fierce battle. 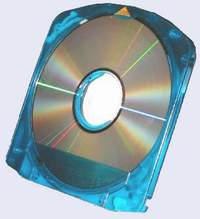 New video technology allows to keep 10 films on one DVD

Without going into too many details into the differences between Blu-ray and HD-DVD we will go as far to say that the appeal of both models lies in their enormous storage capacity. With the appearance of these new models the traditional DVD player, with its capacity of a mere 9 gigabites, will soon become yesterday’s news. So, Blu-ray disks now hold up to 150 gigabites of information while the HD-DVD holds up to 45 gigabites. But why do we need so much space anyway?

The key partly lies in the abbreviation which decodes as high definition. Firstly disks already formatted to copying films with high definition. Images with an unprecedented quality, that promise to create that authentic cinema atmosphere, something previously out of reach with the traditional DVD player. Is it possible, however, to put every episode of ‘Santa Barbara’ or ‘The Simpsons’ on just one disk? Now it’s possible. For in the end the demand of course will always be met.

In America HD DVD disks are already on sale at $25 and in Russia will soon appear the carriers of the standard Blu-ray at $50. But it’s not just our disks that we will have to update but the players also. HD-DVD players are at present only available in the USA at a price of $500 while the Blu-ray players are yet unavailable. When it finally does appear however it will be worth no less than its current competitors.

In fact the fight for the production of the new and advanced DVD players is more a fight it has waged against itself. Behind each one of these new players lies a transnational company, feverously trying to compete for the millions of dollars that consumers are willing to deal out. Toshiba and NEC produce HD-DVD, while Blu-ray is the latest creation of the companies Sony and Panasonic. There are two possible variants to the panning out of events. The worst that could happen for the potential consumers is that both formats will come to exist on the market separately. Therefore if you choose HD-DVD for watching your new films you will still have to invest in the Blu-ray player and vice versa. The best way is to wait for both companies to come to a compromise, and wait for the producers to offer a universal format.

Yet waiting to see if the product is worth it is also a waste of time as history shows; the new product on the market will always banish the old model to the technology graveyard. Such are the methods of the cunning creators themselves, cutting off all productions of the previously ‘modern’ format to be replaced by the new, taking them from the market so that in the end you will have to buy their new product. ‘I was forced to buy The Beatles six times,’ complains one famous writer, aggravated by the present situation. Why is it, then, that we are too often seduced by the thought of a new television every five years when we know that in 15 years they will still be showing the very same films? Of course they are materially more sound and do have the bonus of prestige.

Chronicles of the Technological War

Nearly 25 years ago the war began between the typical video cassettes of the VHS and Betacam. VHS was the victor forcing its competitor into a professional niche from which there was no escape. Yet imagine if things hade gone differently; the very appearance of video cameras today would look decidedly different. Similar comparisons can be made in many different areas. Just two years ago the battle of the DVD recorders was fiercely being fought for the contents of the consumers’ wallet. Thankfully the producers were able to come to an agreement and the majority of all players today support all different formats. At the present moment the standard cellular companies GSM (Russia, Europe) and SDMA (USA and Asia) up to the present moment are fighting it out for the ears of their potential buyers.