Supersoldier of the future to master animal instincts

Military scientists are going to use human tongue as the main tool to create a super warrior who will possess the best abilities of the representatives of the animal world. 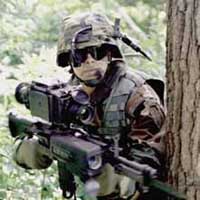 Supersoldier of the future to master animal instincts

The question is that while animals' brains can process the extra stimuli, it is unknown whether human brains can adapt, said institute head Ken Ford. His facility specializes in "human-centered computing," fitting technology to people to make machines more user-friendly, sun-sentinel.com reports.

Researchers at the Florida Institute for Human and Machine Cognition envision their work giving Army Rangers 360-degree unobstructed vision at night and allowing Navy SEALs to sense sonar in their heads while maintaining normal vision underwater - turning sci-fi into reality.

The device, known as "Brain Port," was pioneered more than 30 years ago by Dr. Paul Bach-y-Rita, a University of Wisconsin neuroscientist. Bach-y-Rita began routing images from a camera through electrodes taped to people's backs and later discovered the tongue was a superior transmitter.

A narrow strip of red plastic connects the Brain Port to the tongue where 144 microelectrodes transmit information through nerve fibers to the brain. Instead of holding and looking at compasses and bluky-hand-held sonar devices, the divers can processes the information through their tongues, said Dr. Anil Raj, the project's lead scientist.

In testing, blind people found doorways, noticed people walking in front of them and caught balls. A version of the device, expected to be commercially marketed soon, has restored balance to those whose vestibular systems in the inner ear were destroyed by antibiotics, according to the AP.

The research is being funded by through the Department of Defenses' Defense Advanced Research Projects Agency. The exact amount of the expenditure is unavailable.

Michael Zinszer, a veteran Navy diver and director of Florida State University's Underwater Crime Scene Investigation School, took part in testing using the tongue to transmit an electronic compass and an electronic depth sensor while in a swimming pool.

He likened the feeling on his tongue to Pop Rocks candies.

"You are feeling the outline of this image," he said. "I was in the pool, they were directing me to a very small object and I was able to locate everything very easily."

Underwater crime scene investigators might use the device to identify search patterns, signal each other and "see through our tongues, as odd as that sounds," Zinszer said.

Raj said the objective for the military is to keep Navy divers' hands and eyes free. "It will free up their eyes to do what those guys really want to, which is to look for those mines and see shapes that are coming out of the murk."

Sonar is the next step. A lot depends on technological developments to make sonar smaller - hand-held sonar is now about the size of a lunch box.

"If they could get it small enough, it could be mounted on a helmet, then they could pan around on their heads and they could feel the sonar on their tongues with good registration to what they are seeing visually," Raj said.

The research at the Florida institute, the first to research military uses of sensory augmentation, is funded by the Defense Department. The exact amount of the expenditure is unavailable.

Raj and his research assistants spend hours at the University of West Florida's athletic complex testing the equipment at an indoor pool. Raj does the diving himself.

They plan to officially demonstrate the system to Navy and Marine Corps divers in May. If the military screeners like what they see, it could be put on a "rapid response" to quickly get in the hands of military users within the next three to six months, the AP reports.

Work on the infrared-tongue vision for Army Rangers isn't as far along. But Raj said the potential usefulness of the night vision technology is tremendous. It would allow soldiers to work in the dark without cumbersome night-vision goggles and to "see out the back of their heads," he said.